Today, on 12th June, Anne Frank would have been 90-years-old. Her diary is regarded as the epitome of a testimony to the traumatic horrors of the Second World War and the crimes against the Jewish people.

Learning from history – the German public broadcaster WDR also sees that as one of the most important social tasks and wants to make its contribution. With the innovative app "WDR AR 1933-1945" it is preserving history for posterity. In February the app was published with eye-witness reports from children of the war from London, Leningrad and Cologne. On 12th June with "My dear friend Anne Frank" a further, moving chapter of contemporary history appears in augmented reality within the app.

"Anne Frank embodies the struggle between good and evil and reminds us of the darkest chapter of German history", says WDR Director-General Tom Buhrow. "Her diary has made clear to the world what war and totalitarianism can do to people. It is our responsibility to keep her memory alive in the future. For that reason, I am proud that the school-friends of Anne Frank have spoken about their common history for the WDR's AR app – and, in doing so, have preserved it for the generations to come with state-of-the-art technology."

Two friends of Anne Frank tell their story about the girl who became a tragic myth: To record these memories Jacqueline van Maarsen and Hannah Goslar agreed to be filmed for the app. The result is impressive: like holograms the app embeds the friends of Anne Frank in the respective environment of the user and makes the emotional reports of the two eyewitnesses into a unique experience. 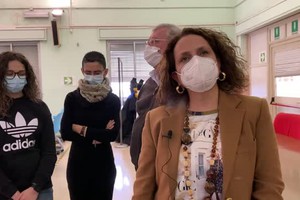