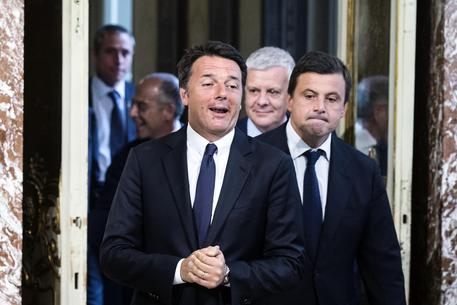 (ANSA) - ROME, AUG 9 - Former premier and centrist Italia Viva (IV) party leader Matteo Renzi on Tuesday urged former industry minister and centrist Azione (Action) party leader Carlo Calenda to team up and form a 'third pole' in the centre of Italian politics for the September 25 general election.
Calenda on Sunday pulled out of an electoral pact with the centre-left Democratic Party (PD), which Renzi once led, after the PD teamed up with smaller leftwing parties including Italian Left (SI) and Green Europe (EV).
"Carlo Calenda and his supporters must decide whether to make a deal with us or not, whether to form a single ticket," Renzi told TV show Omnibus.
"We are willing to join the team because the Third Pole would be the great surprise of the elections and only a strong third pole would be able to ask (outgoing premier and former European Central Bank chief Mario) Draghi to stay on in the premier's office", said the IV chieìf, who has been shunned by his former party the PD and its leader, the former premier he brought down in 2014, Enrico Letta.
Both Calenda and Renzi are campaigning on continuing the reformist agenda of Draghi, whose national unity government was brought down last month by a rebellion spearheaded by the populist 5-Star Movement (M5S) of his predecessor as premier, Giuseppe Conte.
Renzi tiold Ombibus he was not concerned as to who should lead the potential third pole, whether himself or Calenda.
"The leadership of the third pole is the last of my problems," he said.
Renzi told the Italian media earlier that "the door is wide open fro Calenda to join" while Calenda said "the pact with Matteo is not a foregone conclusion" and said his party would be the most likely to take votes from the powerful rightwing alliance.
IV is polling at around 3%, about the same as Azione now it has split from former ally More Europe (+E) after the latter decided to stick to the electoral deal with the PD.
The potential third pole would thus have around 6% of the vote, far behind the PD's 23.4% which combined with the SI and EV's 3.4% would put the current centre-left alliance on just under 30% of voting intentions, including the extra 2% plus from Foreign Minister Luigi Di Maio's Civic Commitment (IC) group.
Even if the centre left were to team up in an unlikely post-election alliance with the centrist third pole, their combined 36% would still be a long way off the opposing centre right alliance's combined current polling tally of almost 45%.
That alliance, spearheaded by Giorgia Meloni of the hard-right Brothers of Italy (FdI) party, is favoured to take control of Italian politics on September 25 and potentially give Italy it's first woman and first post-fascist prime minister.
The coalition also features the far-right League of anti-migrant former interior minister Matteo Salvini, which is currently polling at around 12.5%, second to FdI's 23.8% and compared to the 8% currently enjoyed by ex-premier and media mogul Silvio Berlusconi's centre-right Forza Italia (FI) party.
Salvini repeated Tuesday that Meloni would be premier if her party gets one vote more than the League, which appears a certainty right now.
President Sergio Mattarella is expected to tap the leader of the winning bloc as premier-candidate. (ANSA).