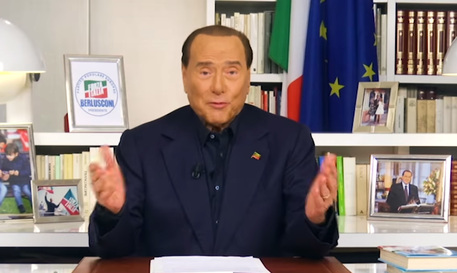 (ANSA) - ROME, AUG 9 - Former premier and centre-right Forza Italia (FI) leader Silvio Berlusconi said Tuesday he is yet to decide whether to run in the September 25 general election.
The three-time former prime minister and media mogul, who served an office ban for tax evasion and will be 86 four days after the election, said supporters had been urging him to stand but he still hadn't made his mind up.
"We'll see about my future," Berlusconi told Radio 24.
"Today we're talking about the future of Italy.
"They have mobbed me in my party, they've told me it's important for me oi run, so now I'll think about it and then we'll decide." Berlusconi was once by far the top dog on Italy's centre right, but he was supplanted first by former anti-migrant interior minister and far-right League leader Matteo Salvini and more recently by post-fascist Brothers of Italy (FdI) leader Giorgia Meloni, who looks set to become Italy's first hard-right and first woman prime minister after September 25.
FdI leads the coalition with 23.8$ of voting intentions as of today compared to 12,.5% for the League and just 8% for FI, down from the high 20s 10 years ago.
Salvini on Tuesday reiterated that Meloni will become premier if she gets one more vote than him. (ANSA).