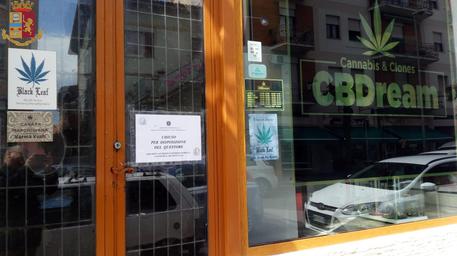 (ANSA) - Rome, May 9 - Deputy Premier and Interior Minister Matteo Salvini said Thursday that his drive to close all of Italy's 'cannabis shops' has started with the closure of three stores in central Italy.
These shops sell 'cannabis light' - hemp flowers and products that have an extremely low level of the psychoactive compound in normal marijuana that makes people high. At the moment cannabis light' can be sold legally, although, in theory at least, the aromatic hemp flowers must not be smoked or eaten and any eventual seeds must not be cultivated.
"I thank the police and the judiciary because three cannabis shops are being closed in Macerata, Porto Recanati and Civitanova Marche," League leader Salvini told a rally in Pesaro.
"A war starts today, street by street, shop by shop, district by district, city by city.
"I don't want dealers, drugs are bad for you". Salvini said he would issue a directive telling police chiefs in other parts of the country to repeat what happened in the province of Macerata.
This issue, however, looks set to be the latest in a series of questions to expose differences between Salvini's League and its government coalition partner, the 5-Star Movement (M5S).
Indeed, Interior Ministry Undersecretary Carlo Sibilia, a M5S member, said he was bemused by the drive. "I don't see why they should be closed," Sibilia said.
"The State should be supportive of small and medium-sized enterprises.
"You can't get up in the morning and close shops. We should work to have shops opening". M5S leader Luigi Di Maio, meanwhile said it was "crazy" to think that the movement was in favour of drugs, after Salvini said the issue could spark a government crisis. Di Maio said Thursday "evidently after seeing the latest polls showing the Movement recovering the League went into paranoia".
"It's no accident that they started talking about school uniforms, weapons, provinces and now they even go so far as to invent that we're in favour of drugs, which is just crazy to even think of". "And you'll see that in a little while they'll start throwing out other provocations" ahead of the European elections. "I'm really sorry they're going so far, talking trash about everything so as to try to win back some more votes. "The League is provoking us so as to recoup consensus," he said.
Salvini earlier called on the M5S to pull a proposal for "free cannabis".
Centre-left opposition Democratic Party (PD) leader Nicola Zingaretti called Salvini's cannabis stance a "mass distraction bomb".
The M5S said that the League had voted for the law legalising cannabis shops.
The League voted for Law 242/2016, which made cannabis shops legal, Five Star Movement (M5S) MP and head of the Constitutional Affairs Commission at the Chamber of Deputies Giuseppe Brescia noted on Thursday. "It was a law that received unanimous approval in the last legislature," he added, "in both the Chamber of Deputies and the Senate. Some academic research has shown that these shops helped to reduce the illegal selling of marijuana and hashish. And so who actually wants to fight drugs?".
Salvini said it would be better to legalise prostitution.