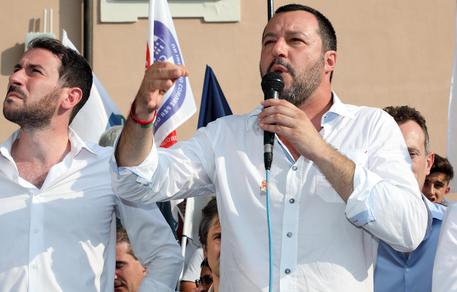 (ANSA) - Milan, June 18 - Interior Minister Matteo Salvini said Monday that the government intends to hold a special sort of 'census' of Roma people in Italy. The new League/5-Star Movement (M5S) executive has said it wants to close all illegal Roma camps in Italy.
"I'm having them prepare a dossier on the Roma question in Italy at the ministry because after (former Minister Roberto) Maroni, nothing has been done and it's chaos," Salvini told TeleLombardia.
"(There will be) reconnaissance on the Roma people in Italy to see who, how, how many, re-doing what was called the census.
"We'll have a register".
The minister said that Roma people who do not have the legal right to be in Italy will be deported via an agreement between States, adding that "unfortunately, you have to keep the Italian Roma at home". The president of an association that defends the rights of the nation's Roma and Sinti communities said Salvini's plan is illegal. "The interior minister does not seem to know that a census on the basis of ethnicity is not permitted by the law," said Carlo Stasolla, president of the Associazione 21 Luglio. "Besides data and figures about who lives in the formal and informal settlements already exist and the few undocumented Roma are effectively stateless, and therefore cannot be expelled.
"We also recall that Italian Roma have been present in our country for at least half a century and sometimes they are 'more Italian' than many of our fellow citizens".
Caretaker Democratic Party (PD) leader Maurizio Martina described Salvini's proposal as "abhorrent". "It is the latest act in an escalation of dangerous, unacceptable messages," Martina told ANSA. "I think he should stop because it is not possible for a great European country like Italy to go through provocations every day that do not resolve any problems but feed a spiral of propaganda that is very dangerous". Ex-premier and PD bigwig Paolo Gentiloni also expressed concern about Salvini, who has spearheaded the League-5-Star Movement government's tough stance on migrants. "Yesterday the refugees, today the Roma, tomorrow guns for all," Gentiloni said via Twitter. Matteo Orfini, the president of the centre-left party, proposed that: "if we really want to have a census, I'd start with racists and fascists".
Italian Premier Giuseppe Conte, meanwhile, was meeting German Chancellor Angela Merkel in Berlin on Monday with the pressing issue of migration among the subjects on the agenda. German government spokesperson Steffen Seibert said the leaders will also discuss other matters, including the "economic issues of the eurozone and unemployment".
He said that the chancellor was "pleased to meet Conte (again) after their first meeting at the G7 in Canada". Conte will propose the allocation of special EU funds to combat poverty in Europe during the meeting, government sources said. This could make it possible for the new Italian government to use European funding to help finance a basic income benefit - the so-called citizenship wage - that it has pledged to introduce, the sources said.