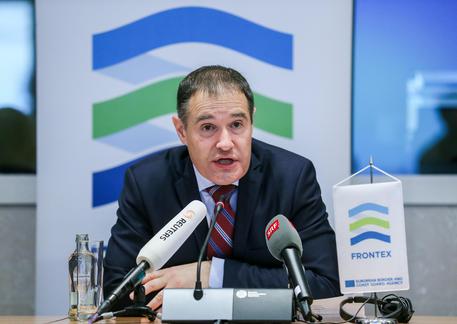 (ANSA) - Brussels, March 27 - Fabrice Leggeri, the Executive Director of EU border agency Frontex, said Tuesday that the state of alert about potential terrorist attacks remains high.
"(The terrorism threat) remains high and we must be certain that there are no frontier crossings to the EU that are not intercepted, as this would be to the detriment of European security," Leggeri told the European Parliament as he reported on the Themis operation.
He said Frontex aircraft had detected un-intercepted migrant flows from Algeria and Tunisia, adding that this raised "security concerns". Italy has taken the brunt of the Mediterranean migrant crisis.
The number of asylum seekers arriving from North Africa has dropped, however, after Rome reached an agreement to support Libya's efforts to combat human traffickers. A 59-year-old man, meanwhile, was arrested on Tuesday in Foggia on suspicion of being an ISIS member.
He allegedly indoctrinated children on jihad, saying death in battle was the only way to reach heaven, during lessons he gave twice a week at an Islamic centre in the southern city, sources said. Investigators secretly recorded the lessons given by Abdel Rahman, an Italian citizen originally from Egypt, for months. "I call on you to combat the unbelievers, cut their heads off with your swords, blow up their heads with your explosive belts," he allegedly told the children. "It's necessary to smash the skulls of the unbelievers and drink their blood to achieve victory". The situation of the children who had these classes with Rahman has been brought to the attention of the local court for minors. Court documents presented in relation to the case feature videos and documents the suspect alleged shared via Facebook, WhatsApp and Twitter on the jihad and how to prepare weapons.
These included talk about the need to transform churches into mosques.
They also allegedly targeted Italy for a terror attack, sources said.