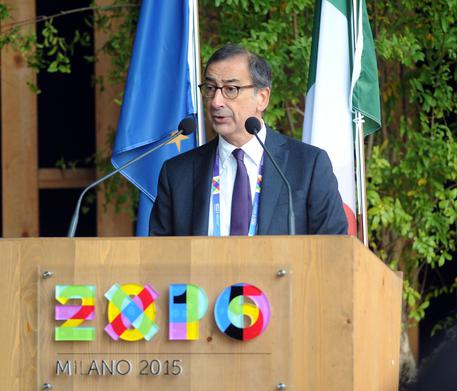 (ANSA) - Milan, October 26 - Expo organisers and government officials on Monday roundly declared the world's fair a success as it approaches its October 31 closing date.
By Monday ticket sales had surpassed 20 million, with Expo Commissioner Giuseppe Sala vowing that number would reach 21 million before the end of the week.
"This Expo worked thanks to the participation of all, just as the Italian president also highlighted," Sala said.
In a front-page essay titled 'The Hope of Milan, European Capital and Italian Engine' published Sunday in Italian business daily Il Sole 24 Ore, Italian President Sergio Mattarella called Expo's success "emblematic of Italian value and potential".
Milan Mayor Giuliano Pisapia also thanked Mattarella, who was on hand Monday as Pisapia spoke during the academic year inauguration at Polytechnic University of Milan.
"Expo has left and will leave important material and immaterial heritage for the future not only of the country but of the entire planet," Pisapia said.
"Thank you Mr. President for being with us today and for your words on Milan, which we read yesterday with joy and pride in an influential newspaper".
"Milan is proud because these results are the fruit of teamwork that shows what we know how to do when we work together," Pisapia said.
Agriculture Minister Maurizio Martina said the success of Expo is thanks to those who attended, and that the large number of attendees was largely due to word-of-mouth.
"It's the people who created this atmosphere, aside from the advertising and communication that we put out there. The real turnaround is the popular sentiment that this big experience managed to generate," Martina said.
"It was the most beautiful demonstration of an Italy of the people, that believes in the future, believes in itself, and comes here to understand how the world interprets a challenge as important and complex as that of nutrition".
Reforms Minister Marianna Madia called Expo a "winning bet".
"There are such strong images of the crowd, that it's impossible not to say that from a numbers point of view, and not only, Expo was a winning bet," Madia said.
With Expo's closing date quickly nearing, the focus of discussions is now turning to the exposition site's future.
Commissioner Sala said the topic is "extremely delicate" but that "things are moving and we're starting to become optimistic".
He said the "most concrete possibility" for the future of the Expo space is that of a university campus.