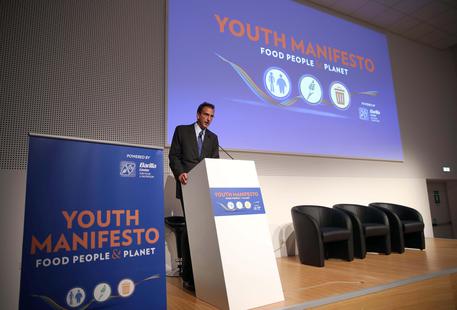 (ANSA) - Milan, September 23 - Barilla Group VP Paolo Barilla on Wednesday called on institutions to effect profound change in the global food system, for the sake of future generations.
"There are a number of challenges to face," he said at the Expo world's fair in Milan, where he unveiled the Youth Manifesto for future food sustainability.
The manifesto was initiated by the Barilla Center for Food and Nutrition (BCFN) and contains seven proposals by 80 young scientists from around the world.
To deal with the paradoxes of food production, food and nutrition "stakeholders, companies, institutions and civil society must have the same mindset," said Barilla.
"Only in this way can they move forward".
Some of the young researchers who worked on the Manifesto took the stage to interview Barilla, who recounted the genesis the BCFN, a nonprofit created to deal with sustainability issues.
"We need to integrate the contributions of the Manifesto into our activities to inspire bureaucracy, institutions and politics at the highest levels," Barilla added.
He called the Manifesto "sober and polite, and I like this because I do not believe change can come about through violence".
One of the researchers asked Barilla if he would appoint one of his colleagues involved in the Manifesto to the pasta group's board of directors.
"I will take this proposal into consideration," Barilla replied. "You can change things by changing your organization".