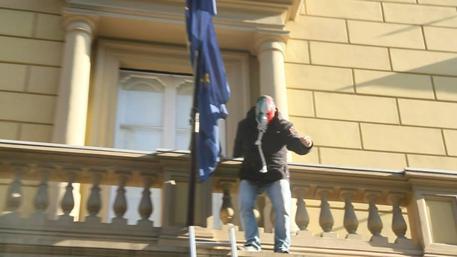 (ANSA) - Rome, December 16 - A leader in the neo-Fascist group CasaPound was sentenced Monday to three months in jail and fined 100 euros for tearing down a European Union flag from the EU's Rome offices over the weekend. Simone Di Stefano, the national vice-president of the club and fledgling political party, was arrested Saturday during a snap demonstration after he erected a ladder, scaled the EU building and removed the EU flag in an attempt to replace it with an Italian tricolor. CasaPound and extreme-right-wing movement Forza Nuova were demonstrating outside the courthouse as it made its ruling in the case Monday. Both groups have participated in the so-called Pitchfork Movement demonstrations, which snarled traffic and blocked commerce in cities across Italy all last week in anti-government and anti-austerity protests. Some leaders in the Movement, which originally consisted primarily of disgruntled truckers and farmers, have blamed "subversive fringes" from the extreme right for infiltrating the movement and spreading violence, looting and destroying public property. On Friday a spokesman from the loose-knit Movement raised suspicions of an extreme-right agenda when he blamed Jewish bankers for "enslaving" recession-weary Italy. On Monday the Movement was showing signs of losing momentum. Local Pitchfork groups in the Sicily and Veneto regions announced they would not be attending a large-scale demonstration scheduled Wednesday in Rome for fear of violence. Still, Movement leader Lucio Chiavegato was undeterred. While he acknowledged evidence of a "violent fringe" marching alongside his Movement, he said that the group's "eight million demonstrators" were able to maintain control. Rome Mayor Ignazio Marino said the city was prepared for any outcome during protests and would not tolerate protesters blocking traffic in the way that has typified protests elsewhere in the country. "The city has no intention of its soil being occupied by tents in places like Piazza del Popolo, especially not right before Christmas," said Marino. "We will not tolerate unauthorized sit-ins of public property nor violence".