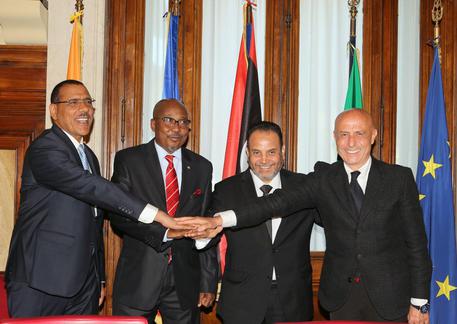 (ANSA) - Rome, May 22 - Migrant holding centers following international humanitarian standards will be set up in Chad and Niger, according to a joint statement of the interior ministers of Italy, Libya, Niger and Chad.
The ministers met Sunday in Rome for a summit organized by Italian Interior Minister Marco Minniti.
Chad and Niger are key countries of transit for migrants who travel to Libya from sub-Saharan Africa to then reach Italy by sea through the central Mediterranean route.
The holding centers for illegal migrants would "follow international humanitarian standards" and fight migrant trafficking in efforts to manage the flow of migrants attempting to reach Europe through Italy, according to the statement after the meeting between Minniti and his counterparts Aref Khoja of Libya, Mohamed Bazoum of Chad and Ahmat Mahamat Bachir of Chad An estimated 90% of the nearly 46,000 migrants who landed in Italy in the first four and a half months of 2017 - up 35% on the same period last year - left from Libya, a country they reached through Niger or Chad.