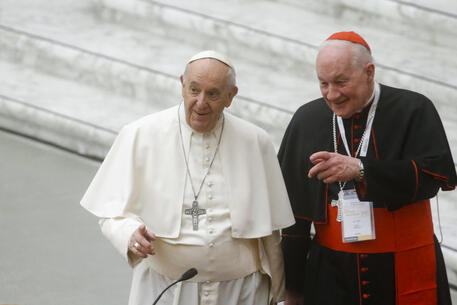 (ANSA) - ROME, AUG 19 - Canadian cardinal Marc Ouellet said Friday, after Pope Francis declined to open a sex abuse probe against him Thursday, that the claims by his Canadian accuser F.
that he had touched her bottom were "false and defamatory".
"Having become aware of the false claims made against me by the claimant (F.), I firmly deny I committed inappropriate acts on her person and I consider defamatory the interpretation and diffusion of these claims as sexual assaults," said the 78-year-old top aide to the pope.
"If a civil investigation were to be opened, I intend to take an active part in it so that the truth is established and my innocence recognized.
There will be no Vatican probe into alleged sexual abuse by Ouellet, accused by a woman of molesting her, Francis has decided on the basis of the evidence, Vatican spokesman Matteo Bruni said Thursday.
"After the preliminary investigation entrusted by the pope to Father Jacques Servais, whose conclusion was that there are no elements to start a trial," Bruni said, "and after other relevant consultations, Pope Francis states that there is not sufficient evidence to open a canon investigation for sexual assault by cardinal Ouellet towards the person F." Marc Armand Ouellet PSS (born 8 June 1944) is a Canadian prelate of the Catholic Church. He has been the prefect of the Congregation for Bishops and president of the Pontifical Commission for Latin America since his appointment by Pope Benedict XVI on 30 June 2010. He continues in those positions though past the normal retirement age of 75 since Pope Francis has yet to accept his resignation.
He was Archbishop of Quebec and Primate of Canada from 2003 to 2010. He was made a cardinal by Pope John Paul II on 21 October 2003. Ouellet was considered a possible candidate for election to the papacy in both 2005 and 2013.
A class-action lawsuit filed at the start of last week named Ouellet as the alleged assailant of an unnamed woman, F., who accused the cleric of kissing her at a cocktail reception in 2008 also having slid his hand down her back and touching her backside. (ANSA).