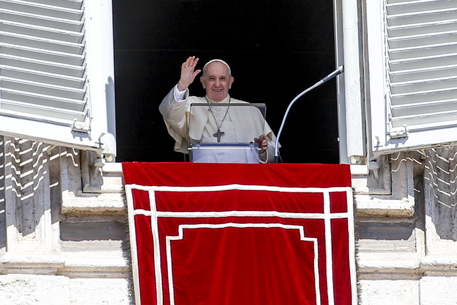 (ANSA) - VATICAN CITY, AUG 30 - Pope Francis has told a Spanish radio station that a nurse saved his life for the second time in his life on the occasion of his recent colon operation.
Francis said the first time had been in 1957.
Referring to the colon op on July 4, the pope told Spanish Catholic radio station COPE in an interview that will be broadcast in full on Wednesday that "a (male) nurse saved my life, a man of great experience".
He added: "It is the second time in my life that a nurser has saved my life.
"The first was in 1957".
The pope, 84, spent 10 days in Rome's Gemelli Hospital at the beginning of July after having an operation called a left-hemicolectomy, which removed the left side of the colon and joined the remaining sections - a common procedures in cases of recurring episodes of diverticulitis.
The first nurse to save Francis's life was an Italian nun who countermanded doctors' orders on the medicine the young seminarian was taking in Argentina to treat his pneumonia.
Vatican watchers said the second nurse to save the pontiff's life could well have been Vatican City health worker Massimiliano Strappetti, who has been alongside Francis in all his health problems, along with a second staff nurse.
The pope, who is set to leave on a four-day trip to Hungary and Slovakia on September 12, has appeared as fit as ever in recent public appearances. (ANSA).