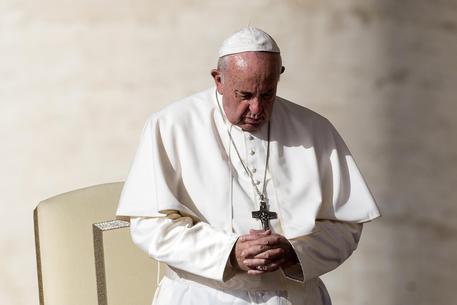 (ANSA) - Rome, November 29 - Pope Francis on Friday said sentences recognizing a disabled or elderly person's "right to die" or not to seek treatment have no legal grounds.
The pontiff said sentences "that on the theme of the right to life are sometimes issued by tribunals in Italy and in many democratic systems" state that "the main interest of a disabled or elderly person is to die or not get treatment", inventing a "right to die" that has no legal grounds, "thus weakening efforts to ease pain and abandoning to their own devices people who are about to conclude their existence".
The pope made the statements during a hearing with members of the research center Centro Studi "Rosario Livatino", a magistrate slain by the mafia in 1990, "for whom the diocesan beatification process has concluded positively", the pope said.
At the hearing, which took place during the national congress on the theme "Magistrature in crisis. Paths to find justice again", the pontiff said Livatino "continues to be an example", especially for judges, who have "a difficult and complex job".
Francis has often reiterated the Catholic Church's dogma about the 'holiness' of human life.
The pope Pope Francis spoke out in June amid a row about the death of a 17-year-old girl in the Netherlands who suffered mental health problems after being raped as a child.
The story of Noa Pothoven was initially reported as being a case of legal euthanasia - although it was subsequently clarified she had not received government permission to end her life.
"Euthanasia and assisted suicide are a defeat for all," the pope said via Twitter.
"We are called never to abandon those who are suffering, never giving up but caring and loving to restore hope".
Dutch sources said Pothoven had not been euthanised but had died after refusing food and drink.
"This is not a case of euthanasia," they said.
The Declaration on Euthanasia is the Church's official document on the topic of euthanasia, a statement that was issued by the Sacred Congregation for the Doctrine of the Faith in 1980.
Catholic teaching condemns euthanasia as a "crime against life" and a "crime against God".
The teaching of the Catholic Church on euthanasia rests on several core principles of Catholic ethics, including the sanctity of human life, the dignity of the human person, concomitant human rights, due proportionality in casuistic remedies, the inevitability of death, and the importance of charity.
It has been argued that these are relatively recent positions, but whatever the position of individual Catholics, the Roman Catholic Church's viewpoint is unequivocal.