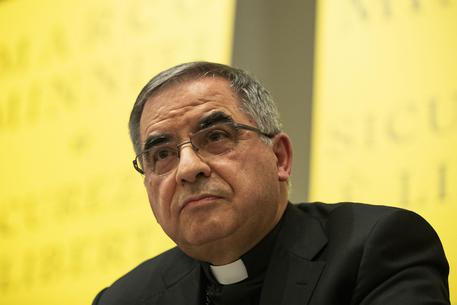 (ANSA) - Rome, October 29 - Cardinal Angelo Becciu, the assistant Vatican secretary of state, on Tuesday rejected charges against him in a Vatican probe into a property deal in London. "They are slanderous charges that I reject in a firm and indignant way. My conscience is clear and I know I have always acted in the interest of the Holy See and never in my personal one. Those who know me well can attest to that", he told ANSA.
The charge he rejected most forcefully was "portraying me as someone who played with and tampered with the money of the poor".
"In the Secretariat of the State we had a fund entitled 'money of the poor'. And it was destined for the poor. If, on the other hand, for money of the poor they want to refer to Peter's Pence, we have to clarify.
"The Pence is not only for the pope's alms giving but also the funding for his Pastoral ministry".
Vatican Secretary of State Cardinal Pietro Parolin said earlier Tuesday that he was confident Vatican investigations will "shed light" on the "opaque" use of Peter's Pence for a property deal in London.
The deal is at the centre of a probe which saw investigators this month raid the offices of two Vatican departments, the Financial Information Authority (AIF) and the Secretariat of State, and the preventative suspension of five employees, one of whom has since been reinstated.
When asked about how the Catholic Church's money is managed, Parolin replied "I think it is well administered".
The Secretariat reportedly invested around $200 million for a stake in a project to buy a building in Chelsea and convert the property into luxury apartments in 2014.
It reportedly bought up the rest of the project in 2018.
Becciu told ANSA "why should (the transactions) be opaque?" "It is accepted practice for the Holy See to invest in property, it has always done so: in Rome, in Paris, in Switzerland and also in London.
"Pius XII was the first to acquire property in London. We were advanced this proposal on this historic and artistic building and when it was done and realised there was nothing opaque. The investment was regular and registered according to law".