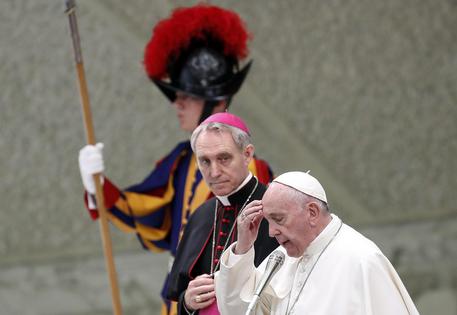 (ANSA) - Vatican City, June 10 - Pope Francis on Monday bemoaned ports being opened to weapons, but frequently closed to asylum seekers who are rescued at sea. "We hear the plea of persons in flight, crowded on boats in search of hope, not knowing which ports will welcome them, in a Europe that opens its ports to ships that will load sophisticated and costly weapons capable of producing forms of destruction that do not spare even children," the pope told participants in the Assembly of the 'Reunion of Aid Agencies for the Oriental Churches' (R.O.A.C.O.).
"I often think about the wrath that God will unleash against the officials of countries that talk of peace and sell weapons to wage war with. This hypocrisy is a sin". Italian Deputy Premier and Interior Minister Matteo Salvini, meanwhile, defending his policy of closing Italy's ports to NGO-run migrant-rescue ships.
When asked during a press conference in Milan about the pope's call for lives to be saved, the League leader replied "that is what we are doing today".
Salvini argued that deaths had fallen sharply as the government's policy was discouraging asylum seekers from attempting the crossing from North Africa.