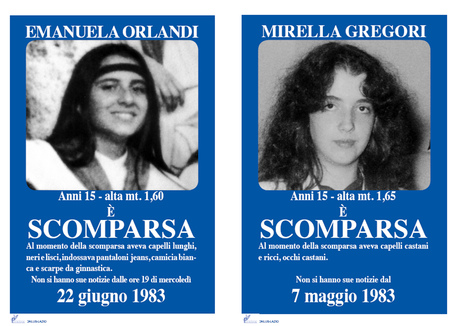 (ANSA) - Rome, November 6 -More bone fragments have been found at the Vatican's nunciature to Italy that may help identify the remains amid speculation they may belong to two 15-year-old girls who disappeared in 1983, sources said Tuesday - though a Vatican-appointed exepert said they could belong to a 30-year-old woman. A part of a skull and a jawbone were found, sources said. The fresh inspection was ordered after the first bones recovered were found to be missing their lower limbs. Like the first bones, the latest ones were found in a basement at Villa Giorgina, which belongs to the Vatican's embassy near the Borghese Gallery. A Vatican-appointed pathologist said the bones could belong to a woman aged between 25 and 30. Giovanni Arcudi, director of pathology at Rome's Tor Vergata university, said "at this moment in time I cannot confirm the age or the sex before getting the lab results". But he said "my first impression, based on the examination of some bone structures, is that it is a woman around 30 years of age, not an adolescent". Arcudi said Monday the first bones found at the nunciature during renovation work last week are "not too degraded". "At first sight they do not seem too degraded, even though they were buried in a damp patch of earth, but we'll only know for certain once we have cleaned the bones". The sex of the bones will be revealed early this week, sources have said. The date of death and possible DNA identification will take several more days after that, they said. A molar has been examined and is probably a wisdom tooth, sources said. A breakthrough in the case of Emanuela Orlandi, the daughter of a Vatican employee, may have arrived from the discovery. Another possibility is that the bones belong to Mirella Gregori, another 15-year-old girl who went missing in Rome in 1983, within weeks of Orlandi. Rome prosecutors have opened a murder probe. Investigators are comparing the cranium and teeth with the DNA of Orlandi and Gregori. It will take "from seven to 10 days" to examine the DNA, sources told ANSA. A preliminary examination of pelvic bones found at the nunciature has confirmed that they belong to a woman's body, ANSA sources said. Four workers discovered the bones, judicial sources said Wednesday. They reportedly told prosecutors "we were digging, we had removed the pavement, then we saw the bones and we immediately raised the alarm", judicial sources said. Emanuela Orlandi's brother Pietro said "the news should fill us with joy but if the bones turned out to be Emanuela's it's as if she died today". He said "if this is the truth it's important for it to come out. I want to know why Emanuela was in that place and who brought her there". A lawyer representing Orland's family demanded more details after the discovery of the remains in the nunciature. "We will ask the Rome prosecutors' office and the Holy See how the bones were found and why the find has been related to the disappearance of Emanuela Orlandi and Mirella Gregori," said the lawyer, Laura Sgrò. "The statement released yesterday by the Holy See does not provide much information," Sgrò said. The bones may well belong to two people, well-informed sources said later Wednesday. The sources said that workers employed in renovation work at the site found nearly a whole skeleton and, in another point, bone fragments. Manuela Orlandi's father Pietro met with prosecutors later, Sgrò said. "There is a preliminary investigation in course and we hope to have more detailed information in the next few days," the lawyer said. Gregori's sister Maria Antonietta told ANSA: "I don't want to delude myself, I want to stay with my feet on the ground but in my heart I hope that those bones belong to Mirella, so we can put an end to this affair and I would have a place to go to mourn and take a flower to my sister". She said "the investigators have our DNA, they took it when some bones were found in the basilica of Sant'Apollinare (Saint Apollinaire)". The Orlandi case has spawned several theories over the years, including that she was murdered to gain traction to have pope John Paul II's Turkish shooter Mehmet Ali Agca freed, or that organised crime was involved. Ali Agca was questioned in the case. In 2016 investigations into the case were shelved. Six people including a priest were implicated in the investigations on suspicion of complicity in abduction and murder. All but one had links with the Banda della Magliana, a now-defunct crime gang based in Rome. In September last year the Vatican described as "false and ridiculous" reports that the Vatican had spend large amounts of money on the case. In an article published by La Repubblica, Italian investigative reporter Emiliano Fittipaldi wrote about a leaked document that allegedly showed the Vatican spent over 483 million lira, around 250,000 euros, on the case between 1983 and 1997. In the piece, Fittipaldi reported money went to a pensioner in London and medical expenses in the British capital. Fittipaldi has written books in the past with revelations linked to the two VatiLeaks scandals featuring embarrassing leaks of confidential documents. In 2016 Italian film director Roberto Faenza said his latest movie "The Truth is in the Sky" was aimed at encouraging authorities to reopen the Orlandi case. The film, inspired by Vito Bruschini's "The Truth on the Orlandi Case" book, tells the story of an English TV station which sends a journalist to Rome to investigate the origins of the Mafia Capitale scandal involving city authorities' links to criminal organisations. "The Truth is in the Sky" is a phrase that Pope Francis said when he met Orlandi's family in the Vatican, Faenza said, adding that in fact he believes the truth is on earth and his film is aimed at encouraging investigators to keep pursuing it.