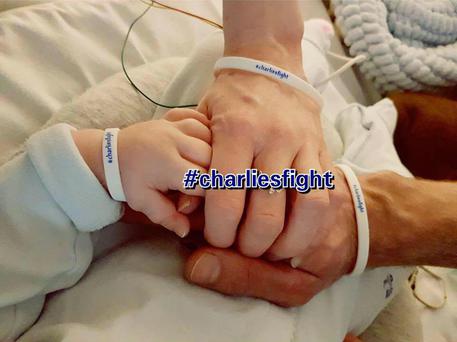 (ANSA) - Rome, July 3 - The president of Rome's Vatican-owned Bambino Gesù Hospital, Mariella Enoc, said Monday she has asked her health director to ask London's Great Ormond Street Hospital if terminally ill 11-month-old British boy Charlie Gard can be moved there. "We know that it is a desperate case and that there are no effective therapies," Enoc said, adding "we are close to the parents in prayer and, if this is their desire, willing to take their child, for the time he has left to live". Enoc said Pope Francis's words on the case summed up her hospital's mission: "Defending human life, above all when it is wounded by illness, is a commitment of love that God entrusts to all men".
US President Donald Trump also on Monday offered help for Gharlie, tweeting: "If we can help little #CharlieGard, like our friends in the UK and the pope, we would be happy to do so".
On Friday Monsignor Vincenzo Paglia, president of the Pontifical Academy for Life, called for respect of the wishes of the parents of Charlie, who do not want their child to be taken off life support.
The parents, Chris Gard and Connie Yates, wanted their son to undergo experimental treatment in the US and have strenuously opposed his doctors' decision to remove him from life support.
The European Court of Human Rights has rejected an appeal filed by the parents to enable Charlie, who suffers from a rare genetic condition and has brain damage from which he will not recover, to undergo treatment in the US.
Doctors at Great Ormond Street Hospital were scheduled to take him off life support on Friday but then extended their deadline.
Before the European court, judges in the UK had ruled that it was lawful for the hospital to withdraw life-sustaining treatment because the child would suffer harm if his present suffering was prolonged without any realistic prospect of improvement and that the experimental therapy could not provide real benefits.
Politicians across the political spectrum in Italy condemned the decision.
Anti-establishment 5-Star Movement (M5S) leader Beppe Grillo, a vocal critic of the EU, slammed the European court's ruling saying it was "incredible" as it meant that the "entire EU" has nothing to say "on such an atrociously fundamental issue".
Anti-migrant and anti-euro Northern League leader Matteo Salvini said the decision amounted to a "homicide" and strongly criticized doctors for reportedly refusing the parents' request to take their child home to die after their last appeal against their decision was denied.
Centre-right Forza Italia Senator Lucio Malan called on Italian President Sergio Mattarella to "intervene with Queen Elizabeth" in order for the child not to be taken off life support, which he said was an "execution".