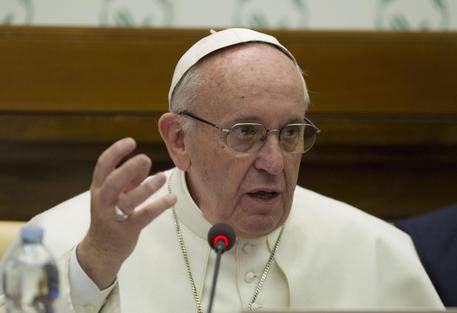 (ANSA) - Rome, February 8 - We must build bridges not walls, Pope Francis told Corriere della Sera daily in an interview out Monday.
"We must build bridges - not walls - because they aid the cause of peace," Francis said ahead of a meeting with Russian Orthodox Patriarch Kyrill in Cuba.
"I...wanted to meet and embrace my Orthodox brothers again," Francis said, adding the February 12 meeting in Havana was set up thanks to "two years of secret negotiations".
The European Union will smile upon migrants once more and "must and can reform itself", the pontiff added.
"An educational system has been broken - the one that transmitted values from grandparents to grandchildren, from parents to children," he said. This broken link must be "rebuilt".
The West must take a hard look at its own responsibilities in the Middle East and the Arab world, Francis said.
"One could have imagined ahead of time what could have happened in the wake of the Arab Springs and Iraq," he said.
"There has in part been a convergence between the Holy See's and Russia's analysis." "Before, there was just one (Libyan military dictator Muammar) Gaddafi, now there are 50," said the pope.
He also named former foreign minister Emma Bonino, ex-Italian president Giorgio Napolitano, and Lampedusa Mayor Giusi Nicolini as the country's "forgotten greats" for their selfless dedication to building bridges with Africa, to serving Italy, and to upholding the rights of refugees.