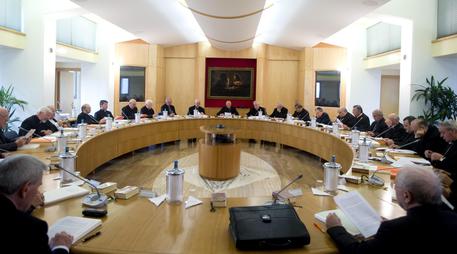 (ANSA) - Rome, January 29 - The Italian Bishops Conference (CEI) on Friday blasted civil unions as an "alternative" to the traditional family. The Italian parliament is currently examining a bill to recognize civil unions, including same-sex ones, to fill a legislative vacuum. Italy is the only western European country not to have either legalised gay marriage or recognised civil unions between same-sex couples.
"The process underway of putting marriage and civil unions on the same level - with the introduction of an alternative to the family - was addressed within wider concern about the cultural change that is crossing the West," the CEI said in a statement at the end of its Episcopal Council. "(In the speeches at the council, participants) expressed awareness of the ecclesiastical mission to announce the gospel of marriage and the family, defending the identity of its natural figure, elements of which are mentioned in the (Italian) Constitution". The Constitution says that the Italian Republic "recognises the rights of the family as a natural society founded on marriage". The CEI statement did not refer to "Family Day," a big rally set to take place in Rome on Saturday and organised Catholic groups who are in favor of traditional heterosexual marriages and against the civil unions bill.
Many Catholic and conservative politicians are backing the event. The civil unions bill is opposed by most of the Italian right and some Catholics in Premier Matteo Renzi's Democratic Party (PD) are also against it, above all the opening of the possibility for one partner in a civil union to adopt the other partner's biological child.
Around 1,000 coaches carrying protesters from across Italy are expected to arrive in Rome for Family Day, one of the organisers said Friday.
"The data we have is showing that about 1,000 coaches will arrive in the capital from across Italy for Family Day," said Nicola Di Matteo, of Let's Defend Our Children Committee. "The numbers are growing.
"We will meet directly at Circo Massimo from 12pm onwards," he said. "The demonstration won't begin in earnest until 2pm, finishing around 4.30-5pm." Among politicians who announced they would attend the was Valentina Castaldini, national spokeswoman for the New Centre Right (NCD) party, a junior partner in Renzi's coalition government.
"Tomorrow I'll be at Family Day to show that this bill is a bluff, that to have a child is not a right, and to protect the rights of children." Roberto Maroni, the Lombardy Governor, also confirmed he would participate alongside Liguria Governor Giovanni Toti and Venetor Governor Luca Zaia.
"We want our presence to confirm our position that we've already set out," he said.