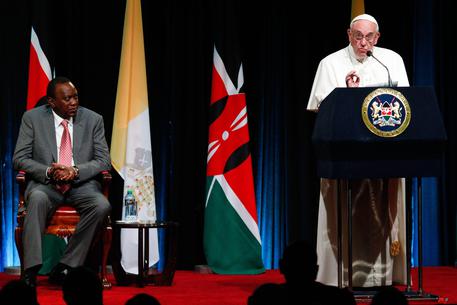 (ANSA) - Nairobi, November 25 - Pope Francis made an impassioned plea for social justice and environmental protection as the means to combat the poverty that is a breeding ground for extremism at the start of his first Africa tour in Nairobi on Wednesday.
"Violence, conflict and terrorism...are fuelled by fear and desperation...born of poverty and frustration," he said in a speech at State House, the official residence of President Uhuru Kenyatta.
The Kenyan chief is a Catholic along with 30% of the country's 45 million people. He said the "struggle against these enemies of peace and prosperity must be carried forward by men and women who fearlessly believe in the great political and spiritual values that inspired the birth" of Kenya.
Lawmakers must promote sustainable development, he added. Deeply rooted African values of protecting nature for future generations "must inspire leaders to promote responsible models of economic development in a world that continues to exploit rather than protect our common home" said Francis, who planted an olive tree prior to his speech. Earlier in the day, Francis was welcomed to Nairobi with traditional dances, colorful costumes, joyful songs, and an official ceremony that included hymns, military honors, and a 21-gun salute. On Thursday, Francis is slated to visit the United Nations offices in Nairobi, where he is expected to call on the international community to act on refugees and climate change. He is also set to visit Nairobi's Kangemi slum and to attend a youth meeting at the city's stadium in the Kasarani district. The pope's November 25-30 Africa mission includes Kenya and Uganda, both victims of Islamist extremist terrorism, and the Central African Republic (CAR), which is being torn apart by factional strife between Muslims and Christians.
The journey is going forward despite heightened fears for security in the wake of the November 13 Islamic terror attacks in Paris. Francis is slated to travel to Uganda on Friday afternoon, and then to the CAR city of Bangui on Sunday morning. The pontiff departs from Bangui for Rome on Monday afternoon.