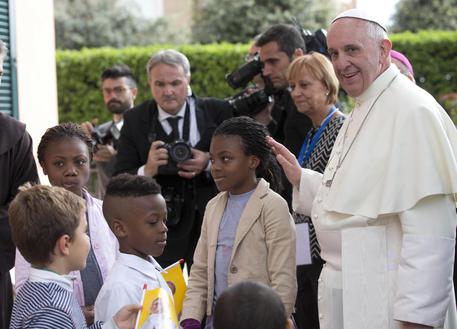 (ANSA) - Vatican City, March 31 - Pope Francis, like so many men and women in their 70s, is being warned by doctors to eat less pasta, walk more often, and lose a little weight to take some strain off his aching back.
Doctors have told ANSA that the pope, at 78, also has a lot of stress aggravated by intensive travel that sees him pack an agenda so full of events that it would exhaust a person half his age.
Concern about the pope's health was heightened in mid-March when he marked his second anniversary as pontiff with a Mexican television interview in which Francis confessed he suspected his time as pope "will be short".
The pope surprised many by saying he did not expect to remain in the post for more than "four or five years".
"I do not know. But I feel that the Lord has placed me here for a short time, and nothing more...But it is a feeling. I always leave the possibility (of change) open," Francis told Mexican network Televisa.
Despite the fast pace set by the pope, his health is reportedly quite robust excluding lung problems he suffered in his younger years.
But sources tell ANSA that changing his eating habits, including fewer carbs and pasta only a few times per week, is needed to counter a weight gain noticed in recent years.
That new weight is likely also aggravating the pope's lower back problems diagnosed as sciatica.
They say he is not walking enough but instead, becomes so tied up in meetings and work that he is not moving as much as he should.
In contrast, former pope Benedict XVI reportedly did not miss a day of taking regular walks.
http://popefrancisnewsapp.com/