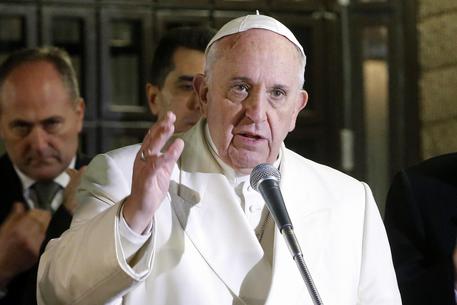 (ANSA) - Vatican City, March 10 - Pope Francis has said he is very scared of physical pain and wants God to spare him that in the event of an assassination attempt. "I have said to the Lord: take care of me. But if your will is that I should die or that they do something to me, I ask you one favour: that they don't hurt me," Francis said in an interview with an Argentine magazine. "Because I'm a real scaredy cat when it comes to physical pain". The pope was answering a question on possible fanatics out to get him, speaking to a priest who is a friend of his, Father Pepe, in an interview with La Carcova News, the magazine of a Buenos Aires slum. In the interview, which was republished in Italian bishops' daily Avvenire, Francis also said elections should be free from private backers who fund politicians' campaigns. "We must achieve a free sort of election campaign, not financed," the Argentine pontiff said. "Because many interests come into play in the financing of an election campaign and then they ask you to pay back. "So the election campaign should be independent from anyone who may finance it".
The 78-year-old Argentine pontiff added in the interview given on February 7 at the Vatican that candidates for public office must be honest and put into practice their election promises.
"A candidate must present himself to society with a clear, well thought-out election platform," Francis said.
"They should say if I get elected an MP, or mayor, or governor, I'll do this because I think this and that's what should be done.
"They should be honest in presenting their position". Francis added that he was hopeful of returning to visit his home country next year. "All things being equal, (I'll come) in 2016, but nothing is sure yet because we'll have to fit it in with other trips to other countries," the pope said.
The head of the world's 1.2 billion Catholics added that one gets a better view of the reality from the peripheries because if "we go out from the centre and move away from it, we discover more things".
Since being elected pope two years ago, Francis has repeatedly said he wanted a "poor" Church and told the clergy to reach out to those at the margins of society.
He also complained about the hold drugs have on many young people and blasted the "triumphalism of traffickers". "There are countries or regions that are totally controlled by drugs," he added.
http://popefrancisnewsapp.com/