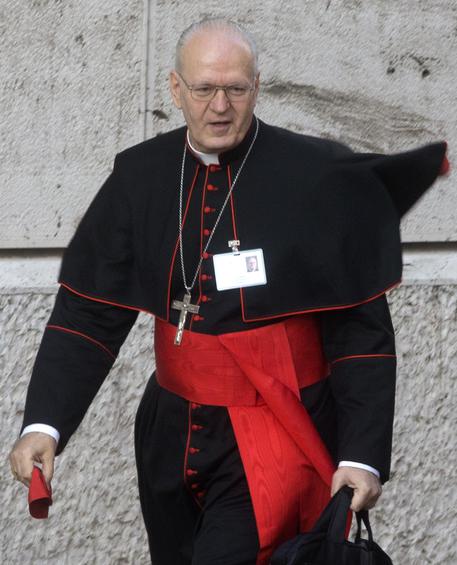 (ANSA) - Vatican City, October 13 - The Catholic Church and its leadership must learn to listen with compassion and greater respect for faithful who are divorced, co-habitating outside marriage, or gay, bishops meeting in an synod said in a mid-term report released Monday.
The report, which comes at the mid-point of a two-week extraordinary synod focused on issues facing the modern family, is not binding and only part of a longer process that continues next year.
But the language and call for greater openness suggests that the group, including some 200 bishops from around the globe, is seeking new ways to deal with the issues concerning many Catholic families.
Facing with divorced and remarried Catholics, bishops called for "courageous pastoral choices" and "new pastoral paths," according to the report read to the synod by Hungarian Cardinal Peter Erdo, the general rapporteur. The synod has seen some controversy with Cardinal Walter Kasper's recent suggestion that the Eucharist should be given to divorced and remarried Catholics in certain circumstances, a shift from conventional Church policy.
Some bishops, including the majority of the German delegation, reportedly agreed with that and with Erdo's call for reformed, simplified procedures for annulling marriages.
However, other bishops and cardinals reportedly disagreed with what some perceive as ideas that are too liberal. The report took no sides or made no recommendations on doctrinal changes but put forward a shift in tone.
"Divorced people who have not remarried should be invited to find in the Eucharist the nourishment they need to sustain them in their state," read the report, formally known as a relatio post disceptationem. "In the same way the situation of the divorced who have remarried demands a careful discernment and an accompaniment full of respect, avoiding any language or behavior that might make them feel discriminated against," added the report.
It also seemed to open up room to accept co-habitation before marriage, saying that at times this was not avoidable if a couple "waiting for a secure existence" such as a steady income and a job.
The report urged greater compassion for Catholics, especially families that are in crisis.
"Imitating Jesus' merciful gaze, the Church must accompany her most fragile sons and daughters, marked by wounded and lost love, with attention and care, restoring trust and hope to them like the light of a beacon in a port, or a torch carried among the people to light the way for those who are lost or find themselves in the midst of the storm," said the report.
It also called for "serious reflection" on homosexuality, noting that Pope Francis has said that "homosexual persons have gifts and qualities to offer to the Christian community...often they wish to encounter a Church that offers them a welcoming home". "Are our communities capable of providing that, accepting and valuing their sexual orientation, without compromising Catholic doctrine on the family and matrimony?" At the same time, the bishops reaffirmed the Church's position that same-sex unions "cannot be considered on the same footing as matrimony between a man and a woman". The second phase of the synod process will involve another major meeting in October 2015 with its theme being the vocation and mission of the family in the Church and the modern world.
http://popefrancisnewsapp.com/