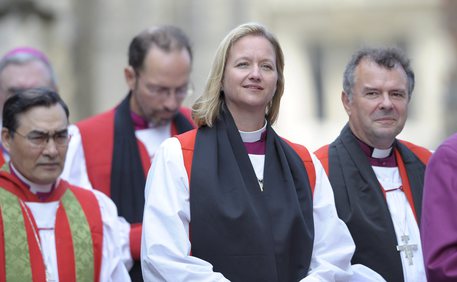 (ANSA) - Rome, April 16 - The Roman Catholic Church needs to show more "vigour" to increase the number of Anglican priests defecting to Rome, according to the prelate in charge of a special body set up by former pope Benedict XVI to welcome clergy from the Church of England.
Monsignor Keith Newton, the former Anglican priest who heads the Personal Ordinariate of Our Lady of Walsingham acknowledged that "more enthusiasm" is needed to increase the number of Anglican Clergy taking advantage of the special body, the Catholic weekly The Tablet quoted him saying in a homily.
"We have to be honest and say that the Ordinariate has not increased as much as we hoped it could. The project was not welcomed. We have to communicate our message more fully and with more vigour and enthusiasm," he said. The group currently counts 85 former Anglican priests and some 1,500 lay members. The Ordinariate was created in 2011 amid expectations of mass defections by conservative Anglicans opposing the Church of England's decision to begin the ordination of women.