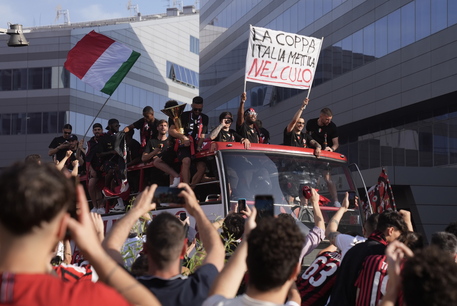 (ANSA) - ROME, MAY 24 - Italian Soccer Federation prosecutors have opened a probe into unsporting conduct after AC Milan players held up an offensive banner mocking city rivals Inter following their victory in this year's Serie A title race.
The banner, held up on an open-top bus during the victory parade on Monday, read "Shove the Italian Cup up your arse".
Inter recently beat Juventus in the Italian Cup final and came second to Milan in the league.
The banner is similar to one showed by former Milan midfielder Massimo Ambrosini after the team won the 2007 Champions League.
Inter responded in kind after winning the 2009 scudetto. (ANSA).