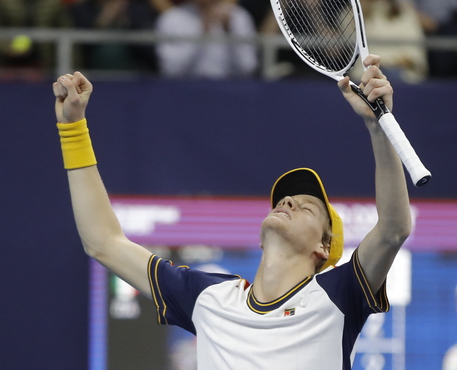 (ANSA) - ROME, OCT 25 - Italy's Jannik Sinner won his fourth title of the ATP season at Antwerp on Sunday to set a new Italian record beating Argentina's Diego Schwartzman 6-2 6-2 in just an hour and a quarter and rose to a personal best 11th in the rankings, not far from the top eight who will make the ATP Finals in Turin on November 14-21.
No Italian had ever won four ATP tournaments in a single season.
The Alto Adige born player now has two tournaments left, in Vienna from Tuesday and then Paris Bercy, to reach his goal of making the finals on home turf.
He would join 25-year-old countryman Matteo Berrettini who has already qualified for Turin having come second at Wimbledon to world number one Novak Djokovic and is currently world no seven.
At 11th, the 20-year-old from Sesto Pusteria in theory just has another three places to climb to get into the Nitto ATP FInals - but actually just two because Spanish leagend Rafa Nadal is out with injury.
Speaking after his double-quick win over Schwartzman, Sinner said "I felt good from the start and I tried to push the ball against a solid opponent like Diego, and I think I succeeded quite well". (ANSA).