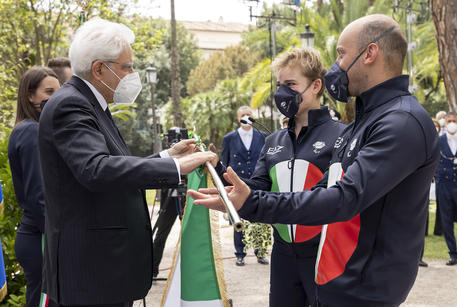 (ANSA) - ROME, AUG 24 - Fencer Bebe Vio and swimmer Federico Morlacchi led the Italian team into Tokyo's Olympic Stadium Tuesday as Italy's flag-bearers at the opening ceremony of the Tokyo Paralympics.
For the first time this year, Italy had a 'double flag-bearer' at the Olympics and the Paralympics, a move that was in line with the IOC's recommendations on gender equality.
Vio, 24, is a three-time world champion and the 2016 Paralympic champion in the wheelchair fencing foil B category.
Doctors were able to save her life but had to amputate all four limbs after she got meningitis B in 2008.
Morlacchi, 27, has won seven Paralympic medals, including gold in the 200 m individual medley SM9 event at the 2016 Rio Games.
Cyclist Elia Viviani and shooter Jessica Rossi were Italy's flag-bearers at the recent Tokyo Olympics, where Italy came away with a record haul of 40 medals including 10 golds, 10 silvers and 20 bronzes. (ANSA).