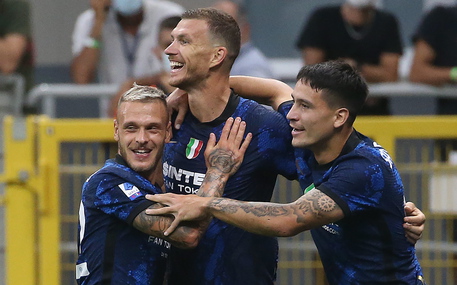 (ANSA) - ROME, AUG 23 - Inter Milan got off to flying start in its Serie A title defence by beating Genoa 4-0 at the Meazza on Saturday.
The goals came from Skriniar, Calhanoglu, Vidal, and ex-Roma veteran Bosnia centre-forward Edin Dzeko, who has replaced Romelu Lukaku after the Belgium star moved to Chelsea.
The departure of Lukaku, and other budget constraints, was the main reason why title-winning coach Antonio Conte ledt and was replaced by former Lazio boss Simone Inzaghi.
Roma also got off to a fine start under new coach José Mourinho by beating Fiorentina 3-1 at the Olimpico with a goal from Mkhitaryan and a brace by Veretout.
City rivals Lazio, under former Napoli and Chelsea manager Maurizio Sarri, also notched a fine 3-1 comeback win at Empoli thanks to Milinkovic Savic, Lazzari and Italy centre-foward Ciro Immobile, the Biancocelesti skipper who won the Golden Ball last year.
Napoli, under former Roma coach Luciano Spalletti, beat promoted Venezia 2-0 at the San Paolo thanks to Insigne and Elmas.
But Turin giants Juventus, the bookies' favourite for their 10th scudetto in 11 years under returned manager Massimiliano Allegri, who replaced rookie Adnrea Pirlo, could only manage a 2-2 draw at Udinese despite going 2-0 thanks to Dybala and Cuadrado. (ANSA).