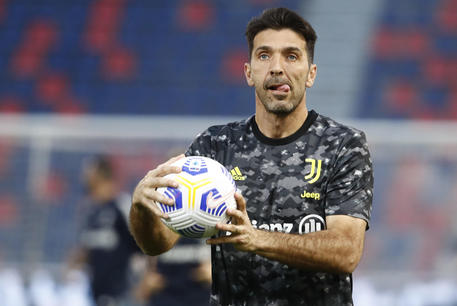 (ANSA) - ROME, JUN 17 - Italian goalkeeping great Gianluigi Buffon will play for Parma, the side he started out with almost 30 years ago, in the second tier next season, the club announced via social media on Thursday.
Buffon, 43, widely considered one of soccer's greatest ever keepers and a World Cup winner in 2006, has agreed to a romantic proposal from the American president of Serie B outfit Parma, Kyle Krause.
"He is back where he belongs. He is back home," read the club's Twitter account in post with a video entitled Superman Returns in which Buffon digs up a treasure chest with a Superman shirt and a Parma jersey.
"Ok Kyle, I''m in," he says at the end, in English. "I'm back".
Buffon left Juventus after picking up his 23rd trophy with the Turin giants with an Italian Cup win over Atalanta last month.
Buffon debuted for Parma aged 17 in 1995 and moved to Juve in 2001, where he won a record 10 Serie A titles up to last year, barring a brief sojourn at PSG in 2018-2019.
Buffon is now aiming to help Parma return to their glory days of the late 1990s when they were challenging Serie A's top outfits, coming second in 1997, and winning two UEFA Cups and one European Super Cup.
Parma were relegated to Serie B this past season (ANSA).