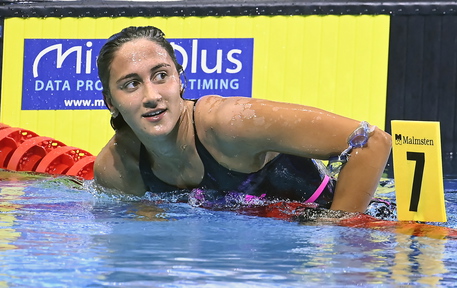 (ANSA) - ROME, MAY 24 - Italy came away from the European Swimming Championships in Budapest with a record haul of 27 medals including five golds from women athletes including three on the last day.
Benedetta Pilato won the women's 50M breaststroke in a time just slightly below the world record she set in the semi-final, while Margherita Panziera won the 200m backstroke and Simona Quadarella added gold in the 400m freestyle to her wins in the 800m and 1500m, making her the queen of the games.
Quadarella, 22, from Rome, said "I wasn't expecting it. I was more afraid than in Glasgow (where she also won the 400m), I felt less sure. This was not a well-prepared Euros, the goal is the Olympics (this summer in Tokyo)." Pilato, 16, from Taranto in Puglia, whose new 50m breaststroke record stands at 29.30 seconds said, "I was expecting the gold, a bit, but I didn't expect to go so fast again," after coming in just five 100ths of a second off her record.
Panziera, 25, from the northern town of Montebelluna, said after recording her third best time in the 200m backstroke to win the gold, "I'm really happy because I really didn't think I could go so low. That means I'm working well and I'm really looking forward to the Olympics".
Italy also did well in the open water championships with 1500m freestyle world record holder Gregorio Paltrinieri, who won gold in the 5 and 10 km and the team race, and then added silver in the pool in the 800m and 1500m. (ANSA).