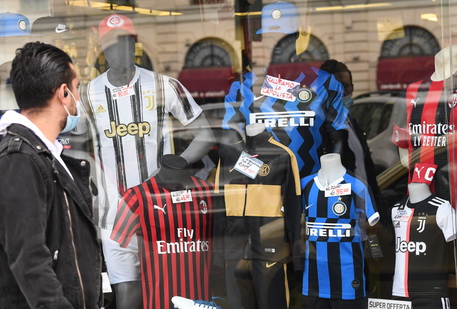 (ANSA) - ROME, APR 20 - AC Milan CEO Ivan Gazidis has said the breakaway European Super League will be good for the club and for whole of football.
"We are confident that this new 20-team competition will capture the imagination of billions of soccer fans all over the world and will be a new, exciting chapter for the game of soccer," Gazidis wrote in a letter to Milan's sponsors and commercial partners.
"The Super League will provide value and support to the whole soccer pyramid with greater financial resources".
He added that Milan does not want to leave Serie A.
"It will remain the most important weekend competition in Italy and Milan is proud to remain," he wrote.
UEFA President Aleksander Ceferin told the 12 clubs planning to form a breakaway European Super League, including Juventus, AC Milan and Inter, that it is not too tale to halt the move, which has sparked a massive backlash. "Gentlemen you have made a huge mistake," Ceferin said as he opened the UEFA Congress in Montreux.
"Some will say it is greed, others ignorance, arrogance .
"It doesn't matter. There is still time to change your mind.
"Everyone makes mistakes".
UEFA and the soccer authorities of Italy, Spain and England have said the 12 clubs risk being ejected from their domestic championships if they press ahead with plans for a midweek Super League, which would rival the UEFA Champions League and feature 20 teams, including 15 permanent members who would not need to qualify.
Inter, Juve and Milan told an informal video-conference meeting of Serie A on Monday that they want to remain in the Italian top flight, sources said.
Although he did not directly back up Ceferin over his threat to exclude players from Super League clubs from their national teams, FIFA Chief Gianni Infantino issued a strongly worded statement that left now doubts about whose side he was on.
"At FIFA, we can only strongly disapprove the creation of a Super League which is a closed shop, which is a breakaway from the current institutions," Infantino said.
"There is no doubt whatsoever of Fifa's disapproval. Full support to UEFA. "It is my task and our task to protect the European sports model, club competitions, national teams. If they choose to go their own way, they must live with their choice.
"They are either in or out.
"They cannot be half-in and half-out.". (ANSA).