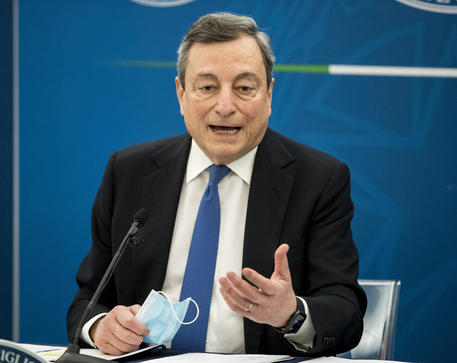 (ANSA) - ROME, APR 19 - Premier Mario Draghi said on the controversial planned Super League of top European soccer teams Monday that "the government is carefully following the debate around the soccer Super League project and supports with determination the positions of the Italian and European soccer authorities to preserve national competitions, meritocratic values and the social function of sport".
Juventus, AC Milan and Inter are among 12 clubs to say they are forming a controversial breakaway European Super League to rival the UEFA Champions League. The aim is to have a midweek tournament made up to 20 teams, 15 of which would be permanent founding members who would not have to qualify.
The other clubs to have said they are taking part are Arsenal, Atletico Madrid, Chelsea, Barcelona, Liverpool, Manchester City, Manchester United, Real Madrid and Tottenham.
In a joint statement, European soccer's governing body UEFA, the Italian Soccer Federation (FIGC), the Lega Serie A and the football authorities of England and Spain threatened the breakaway clubs with exclusion from domestic competition, describing the plan as "cynical". (ANSA).