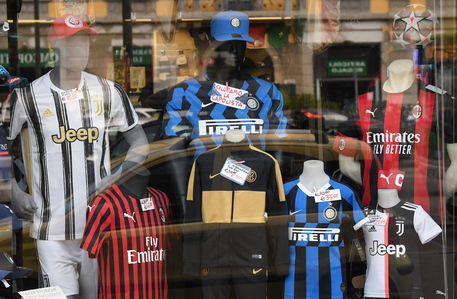 (ANSA) - ROME, APR 19 - Premier Mario Draghi on Monday added his voice to a chorus against the controversial planned new Super League of top European soccer teams saying that "the government is carefully following the debate around the soccer Super League project and supports with determination the positions of the Italian and European soccer authorities to preserve national competitions, meritocratic values and the social function of sport".
Juventus, AC Milan and Inter are among 12 clubs to say they are forming the controversial breakaway European Super League to rival the UEFA Champions League. The aim is to have a midweek tournament made up to 20 teams, 15 of which would be permanent founding members who would not have to qualify.
The other clubs to have said they are taking part are Arsenal, Atletico Madrid, Chelsea, Barcelona, Liverpool, Manchester City, Manchester United, Real Madrid and Tottenham.
In a joint statement, European soccer's governing body UEFA, the Italian Soccer Federation (FIGC), the Lega Serie A and the football authorities of England and Spain threatened the breakaway clubs with exclusion from domestic competition, describing the plan as "cynical".
"We will consider all measures available to us, at all levels, both judicial and sporting in order to prevent this happening.
Football is based on open competitions and sporting merit; it cannot be any other way," the statement said.. "The clubs concerned will be banned from playing in any other competition at domestic, European or world level, and their players could be denied the opportunity to represent their national teams".
Juventus Chairman Andrea Agnelli has quit the UEFA executive committee and the helm of the European Club Association (ECA) and become the vice-chairman of the Super League. UEFA President Aleksander Ceferin blasted Agnelli after a meeting of the executive committee on Monday, calling him a liar.
"Andrea Agnelli is the biggest disappointment of all.I've never seen a person that would lie so many times, so persistently as he did," Ceferin said. "Greed allows all human values to evaporate".
Giovanni Carnevali, the CEO of Serie A side Sassuolo, told RAI radio that "they risk killing our championship. "Unpleasant things are on the horizon and we have probably been taken for a ride," he added. "It is not easy to be in the football business today. The bigger teams have more losses and the system needs revising. "But there has to be meritocracy in sport. Sometimes being too greedy is bad".
Nationalist League party leader and AC Milan fan Matteo Salvini was critical too. "Soccer and sport cannot just be about business and spoilt players," he said. "As a Milan fan I should be happy but I don't like it. "If Milan don't finish in the first four places they don't deserve to be in the top European competition. "I'll never change the colour of the team I support for as long as I live. "But by doing this, they are taking away the passion and joy of the fans. "Soccer is the fans, people at the stadiums, not pay TV".
Lazio's Spanish midfielder Luis Alberto was one of the first current players to come out against the plan. "No to the European Super League," he said via Instagram.
FIGC President Gabriele Gravina said the only way forward is to move on with UEFA's planned revamp of the Champions League.
"Soccer belongs to the fans," he said.
Juventus shares surged 17% in Milan after the announcement of the new competition. (ANSA).