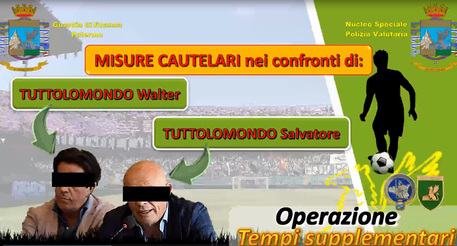 (ANSA) - PALERMO, NOV 4 - The former owners of Italian soccer club Palermo were arrested Wednesday on charges of fraudulent bankruptcy.
Palermo, which boasted two top-5 Serie A finishes in the 2000s, was relegated from Serie B to Serie D for financial irregularities in 2019 and immediately won promotion to Serie C, where it now plays.
Former owners, the Palermo businessmen Salvatore and Walter Tuttolomondo, were taken into custody by police.
Three other former part owners, Roberto Bergamo, Tiziano Gabriele and Antonio Atria, were ordered to report to police regularly and were banned from doing business for a year.
They were placed under investigation, like the arrested pair.
Those probed are accused of fraudulent bankruptcy, illegally paying taxes with non-existent credits, money laundering, fraud and obstructing the Italian soccer clubs' oversight body, COVISOC.
During the investigation police confiscated some 1.395 million euros.
The probe stems from the 2019 sale, for a nominal price of 10 euros, of the former Palermo football club by longtime owner Maurizio Zamparini, to the new owners.
Because of the financial irregularities, the club was reconstituted in Serie D that year.
The club was first involved in a bankruptcy procedure two years earlier, in 2017, but emerged unscathed.
The current owner, Palermo businessman Dario Mirri, reformed the club, firstly with many semi-professional players, and won promotion from Serie D. (ANSA).