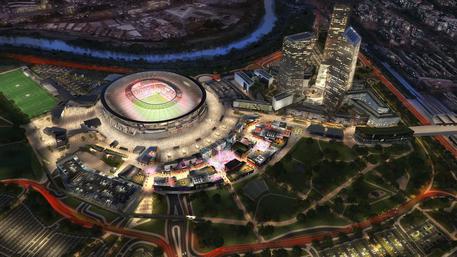 (ANSA) - Rome, June 27 - Rome City Councillor Marcello De Vito, member of the 5-Star Movement (M5S) and likely to be elected as Speaker of the City Council under the new M5S Mayor Virginia Raggi, on Monday said the administration may take the issue of the construction of AS Roma's new stadium back to the assembly. "We will evaluate whether to bring it to the council floor, we'll make the necessary checks," he said, stressing that the M5S is not against a new stadium, but "ask it be with respect to the laws". .
"Of course, a debate where the stadium is 14% of the project isn't a debate on the stadium," De Vito said. In 2014, the club presented their plans to build a swanky new 52,000-capacity stadium in the southern Tor di Valle area of the Italian capital.The project for the new stadium, which will also be home to shops, bars and conference facilities, includes facilities for music and entertainment, including a 500-person stage in a Roma-themed restaurant, a 5,000-seat outdoor amphitheater and a 13,000-seat amphitheater.