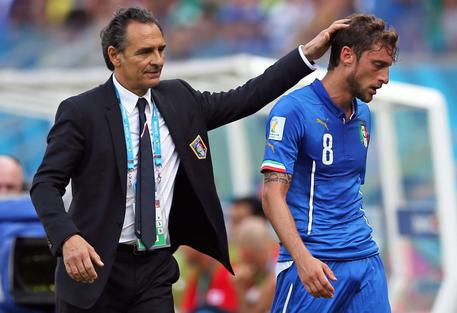 Italy coach Cesare Prandelli said Tuesday that he was quitting after his side were knocked out of the World Cup in the group stage with a 1-0 defeat to Uruguay. Giancarlo Abete, the head of the Italian Soccer Federation (FIGC), said that he hoped Prandelli would take back the resignation, while at the same time announcing he was quitting.
Prandelli, however, stressed that his decision was "irrevocable".
"I'm the man in charge of the technical project and I told Italian Soccer Federation President (Giancarlo) Abete that I've resigned," said Prandelli, who had extended his contract until 2016 just months ago.
"I've been attacked like a political party since I signed the renewal. I haven't stolen taxpayers money and I have never stolen". Former Fiorentina boss Prandelli took over Italy after their dire group-stage elimination at the 2010 World Cup in South Africa.
He rejuvenated the squad, led them to the final of Euro 2012 and went into the World Cup in Brazil with high hopes of going far. Abete said the FIGC's executive will decide shortly whether to accept Prandelli's resignation.