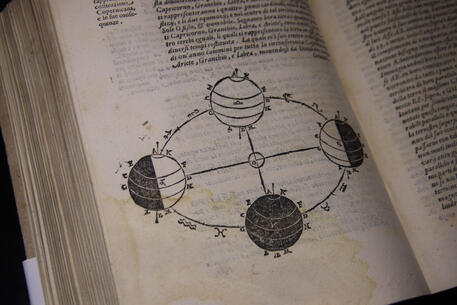 (ANSA) - ROME, AUG 18 - A letter purporting to be by 17th century Italian astronomer Galileo Galilei that the University of Michigan has boasted as one of its most prized possessions is in fact a 1930 forgery by a notorious Milanese counterfeiter who mass-produced authographic pieces for years in order to keep his seven mistresses, Gerogia University historian Nick Wielding says in his preparatory writings for a new biography of the Italian scientist.
The letter on the four moons of Jupiter is in fact the work of famed forger Tobia Nicotra, Wielding says.
Michigan university librarian Dona Haywardsaid the news was like a "punch in the stomach".
Galileo (15 February 1564 - 8 January 1642) was an Italian astronomer, physicist and engineer, sometimes described as a polymath, from the city of Pisa, then part of the Duchy of Florence.
Galileo has been called the "father" of observational astronomy, modern physics, the scientific method, and modern science.
(ANSA).