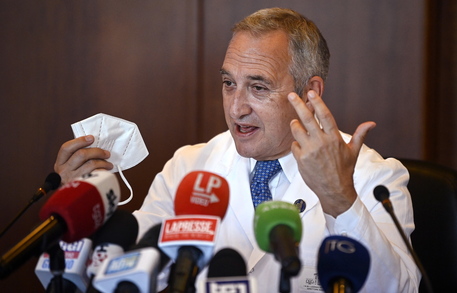 (ANSA) - ROME, MAY 25 - Italian monkeypox cases rose to seven Wednesday as a new case was reported by the Spallanzani Hospital in Rome.
The Spallanzani, Italy's premier infectious disease hospital, is dealing with six cases, five found in Lazio and one in Tuscany, while the Sacco Hospital in Milan is handling one found in Lombardy.
Lazio Health Councillor Alessio D'Amato said four of the Spallanzani cases were at the hospital and in good clinical condition while a fifth was being treated at home.
He said the epidemiological investigation was proceeding.
"There is no alarm but the infection surveillance system is in a state of maximum attention," said D'Amato.
More than 250 monkeypox cases have now been reported in at least 16 countries, according to the World Health Organization.
Spallanzani researchers said the new cases were probably part of a pan-European cluster linked to cases in the Canary Islands.
The number of Italian monkeypox cases rose to four Monday after the South-East Tuscany health authority said a 32-year-old man who returned to Arezzo on May 15 from a holiday in the Canary Islands had the disease.
The news came amid reports that the virus has been sequenced for the first time, in Portugal.
The Arezzo man is being treated at Arezzo's San Donato hospital.
It is the first case in Tuscany. Five other men are being treated by the Spallanzani, in Rome.
And 15 men who had been in contact with them are now self-isolating, across the Lazio region surrounding Rome, the hospital said.
The first Italian case of monkey smallpox, or monkeypox, also regarded a man who had recently returned from a stay in the Canary Islands.
Monkeypox was first discovered in 1958 when two outbreaks of a pox-like disease occurred in colonies of monkeys kept for research, hence the name 'monkeypox.' The first human case of monkeypox was recorded in 1970 in the Democratic Republic of Congo.
Since then monkeypox had mainly been reported in humans in other central and western African countries.
Symptoms include fever, headache, muscle pains, swollen lymph nodes, and a rash that forms blisters and crusts over. Monkeypox can be contracted from close contact with an infected person, sexual relations, contaminated objects, handling bushmeat and an animal bite or scratch.
Many of those who have contracted it are gay men but the United Nations AIDS body, UNAIDS, has condemned what it called "stigmatizing language" similar to that which circulated during the first stage of the AIDS epidemic, describing it as "the gay plague".
Monkeypox is not classified as a sexually transmitted disease but it can be contracted via the exchange of bodily fluids, whether through close physical contact or through sexual relations.
It is not an airborne virus and its several strains are very far from being as contagious as COVID-19 and its latest much faster spreading sub-variants. (ANSA).