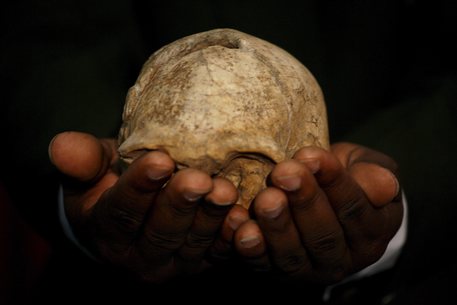 (ANSA) - Rome, June 15 - Italian and Eritrean researchers on Wednesday found the first footprints of 'homo erectus', a key predecessor of modern man. The footprints, left 800,000 years ago in the sand of a lake that is now part of an Eritrean desert, were found by palaeontologists from Rome's La Sapienza University and the National Museum of Eritrea, at the Aalad-Amo site in the east of the country. Dig coordinator Alfredo Coppa said the footprints would likely say a lot about a key species in the history of human evolution.
The footprints are very similar to those of modern man and could provide important information about our ancestors' foot anatomy and locomotion: they show details of the toes and the sole of the foot that made them efficient at walking and running. The footprints are aligned in a north-south direction the same as hoof prints left by extinct antelopes and are preserved in a sediment of hardened sand, probably exposed to flooding.
This suggests that the area was a lake surrounded by savannah. The discovery is the first time that footprints from the mid-Pleistocene era have been found, a very important period of transition in human evolution, in which human species with larger brains and more modern bodies than homo erectus developed.