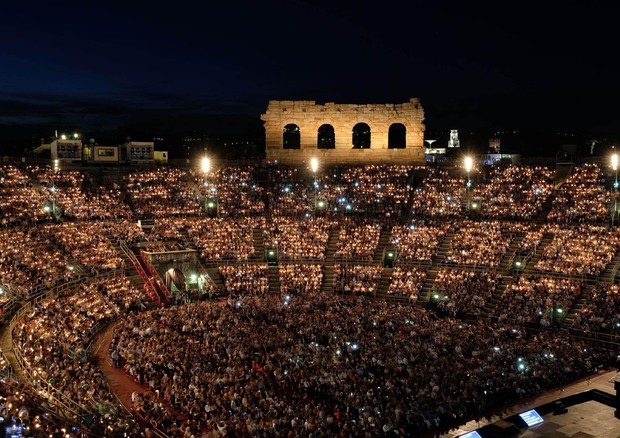 Just a month after its launch, the '67 Colonne per l'Arena di Verona' (67 Columns for the Verona Arena) fundraising-and-corporate-membership project has already collected over 1.5 million euros. The project, led by the Arena Foundation Superintendency and by patrons Sandro Veronesi (Calzedonia Group President) and Gian Luca Rana (Pastificio Rana CEO), in partnership with the Athesis publishing group, sees the symbolic return of the 67 columns of the outermost circle of the Arena's arches, which collapsed in 1117, via the support of 67 companies. So the '67 Columns' patrons have flanked the long-standing sponsors to show that they are ready to do their bit in this difficult period. A symbol of Italy around the world, the economic driving force of one of Europe's richest provinces, with the 'living' monument's ancient stones, the Arena Foundation has had an educational vocation since it was founded in 1913 and it has shown itself capable of riding the wave of the new digital era: it was the first Italian foundation on social media, the fourth worldwide, and today it is involved in new technological set-ups. It has been embraced since June 9 by the new '67 Columns' - the leaders of the Veronese economy who responded to the appeal made by the amphitheatre, embodied by a concrete gesture to defend Verona's cultural masterpiece and one that has an even greater symbolic importance. "Just like with our companies, we realized that it is not enough to produce quality products, you also have to tell the story, and show the people inside the story," said Calzedonia President Veronesi. "We are convinced that it is necessary to put in place new strategies to tell our story, especially at the moment. "The Calzedonia group has supported the Foundation for 15 years and the '67 Columns' initiative is a message to other entrepreneurs: it is necessary to tell your story, not to make an exhibition of yourself, but to support the community, culture and the country. "By talking about the contributions and investments for the Foundation, you stress how important it is and how awareness of it in Italy and around the world is an advantage for everyone". Pastificio Rana CEO Gian Luca Rana added: "we responded enthusiastically to the '67 Columns' project of the Arena Foundation because it represents a signal of hope for the future for us, a concrete commitment to the local area and a sector, the culture-and-entertainment sector, which has been hit hard in recent months. "As entrepreneurs, we feel an even greater responsibility at this particular moment in history to actively contribute to supporting the community we have our roots in and which we are anchored to," Rana continued. "We believed in this effort a great deal from the start and we are particularly happy that our invitation was taken up by so many businesses because the '67 Columns' project contributes to raising awareness around the world about our city's and our country's artistic and cultural excellence". The appeal launched a month ago has borne fruit, with over 1.5 million euros collected to support a foundation that is an Italian cultural standard-bearer around the world and is also one of the few cultural bodies that does not cost the country anything, as it gives the State back more than it receives. The story of the project has been told through various media outlets by the Athesis group via the tales of the lead players in order to reach the hearts of those who care for the city as part of a collective awareness-raising effort. Mayor Federico Sboarina thanked the project's supporters. "Thank you because what you are doing shows that, in order to emerge from such a terrible pandemic, only by joining forces can we respect the double commitment we have with respect to the Arena: to preserve it as a monument and we are doing that thanks to the Art Bonus, the Cariverona Foundation and Unicredit, with a restoration that will give the amphitheatre its ancient splendour back," he said. Finally, Arena Superintendent and Artistic Director Cecilia Gasdia outlined the importance of this initiative for the cultural body. Addressing the '67 Columns' of the 2021 Festival and all the #iosonolarena (#I AmTheArena) participants, she said: "Today you gather like an ancient Greek chorus at a Roman amphitheatre. You represent the citizens who every year actively participated in the utmost artistic expression of their time, taking the stage and singing in unison".