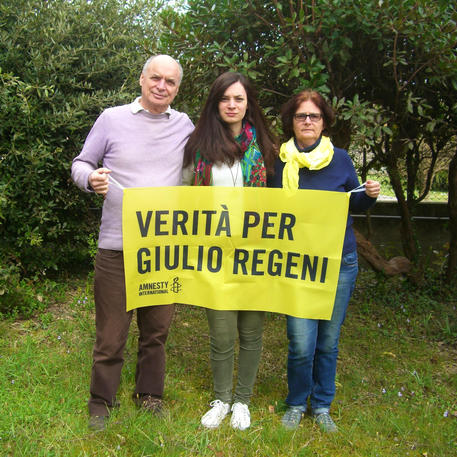 (ANSA) - ROME, JAN 25 - More substantive cooperation is needed from Egypt on the torture and murder of Italian student Giulio Regeni who disappeared on the Cairo metro exactly seven years ago, a week before his horribly mangled body was found in a ditch outside the Egyptian capital, Foreign Minister Antonio Tajani told the House in marking the anniversary Wednesday.
Tajani said last Sunday that Egyptian President Abdel Fattah e-Sisi had shown greater willingness to cooperate in talks in Cairo while Defence Minister Guido Crosetto said Egyptian cooperation would be "100%" in bringing to trial the four Egyptian security officers whom Rome prosecutors have charged in the case, but so far no concrete action has materialized from the Egyptian authorities.
Both Tajani and Crosetto have stressed that Rome must continue to speak to Cairo on a raft of issues including North African security and the Libyan crisis, while insisting on bringing the four intelligence agents to justice.
A Rome trial of the four officers - National Security General Tariq Sabir and his subordinates, Colonels Athar Kamel Mohamed Ibrahim and Uhsam Helmi, and Major Magdi Ibrahim Abdelal Sharif - has been stymied by unsuccessful efforts to inform them they are on trial, because of Egypt dragging its heels on the case.
Tajani told the House at Wednesday's question time: "Italy will do everything to remove the obstacles (to progress in trying the four spies), and in my meetings in Cairo I saw a different willingness on Egypt's part even if the process is at a standstill.
"We will continue to monitor what Egypt does in the future, we will see if words will be followed by deeds. There is no justice without truth".
'We need more active cooperation,' Tajani said, "starting with the notification of the writs of summons (to the four officers), but we cannot do this without dialogue".
Politicians from all sides of the spectrum on Wednesday called for more efforts to force Egypt to cooperate in the case, with centre-left Democratic Party (PD) outgoing leader Enrico Letta saying "it's been seven years since Giulio disappeared on January 25, 2016 and we must get to the truth about his torture and murder".
Centrist Azione (Az) party chair Mara Carfagna said "Italy must continue to demand the truth" while Green leader Angelo Bonelli said "we continue to ask for justice".
A candlelit vigil will be held in Regeni's home town of Fiumicello Wednesday evening to mark the exact time he was last seen alive, on the Cairo metro, on January 25 seven years ago, a week before the body turned up in a motorway ditch on the way to Alexandria, so disfigured that his mother Paola Deffendi said she could only recognise her son by the tip of his nose.
It will be led by Deffendi, her husband Claudio Regeni, and Giulio's sister Irene.
Regeni is believed to have been tortured to death because of the politically sensitive nature of his Cambridge University doctoral thesis, Cairo street hawkers unions, whose leader had fingered him as a spy.
He is among the countless people, mostly Egyptian dissidents, who are disappeared by the Sisi regime every year, rights group have said. (ANSA).