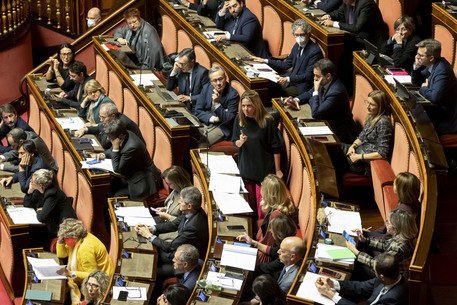 (ANSA) - ROME, DEC 7 - The 2023 budget bill of Premier Giorgia Meloni's government looks set to come under 'attack' in parliament on various fronts, with the deadline for amendments to the package kicking in on Wednesday.
The executive had hoped to limit the number of amendments to 400, with time tight as the bill must be approved by the end of the year, but that threshold is set to be surpassed by a big margin.
A measure that raises the limit for cash payments from 2,000 euros to 5,000 is among those being targetted.
Another is one that enables retailers to refuse to accept card payments for amounts of up to 60 euros.
Opposition parties have said both measures will facilitate the use of cash and discourage traceable electronic payments, which could make tax evasion easier.
Other measures that are set to come 'under attack' are the raising of the maximum threshold of the 15% flat tax for the self-employed from those on up to 65,000 euros a year to those on up to 85,000 and the 'Quota 103' system, which makes it possible for people to start claiming their State pension at the age of 62 if they have 41 years of social-security contributions.
Meloni is meeting the whips of the parties supporting her coalition government on Wednesday and then will have talks with Italy's biggest trade unions. (ANSA).