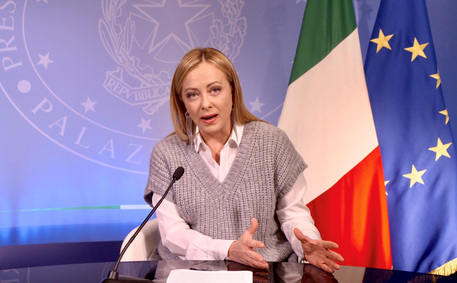 (ANSA) - ROME, NOV 29 - Premier Giorgia Meloni said she was confident her government will not be short-lived and suggested claims that an administration led by her and her right-wing Brothers of Italy (FdI) party would be "dangerous' have already been disproven in an interview in Tuesday's edition of Corriere della Sera.
"I knew it would be a hard task to lead Italy at such a complex time," she said.
"But, unlike (my predecessor Mario) Draghi, I can count on a clear majority in parliament, a common programme (agreed with coalition partners) and a mandate from the people.
"That's why I know that this government will last a long time".
She added that the "story" of her executive being "dangerous" now "only survives in the hopes of the left.
She defended her government's 2023 budget bill, saying it had "vision" and set the priorities of "supporting the most fragile and strengthening the middle class".
Meloni added that she did not fear that package would be "turned on its head" during its passage through parliament.
She said she did not have a meeting scheduled with French President Emmanuel Macron following the recent tension between Rome and Paris over the management of asylum seekers, but added that "we will certainly have to see each other again".
She also talked about last weekend's disaster on Ischia and the need to address the problem that many inhabited areas in Italy are exposed to risks of flooding and landslides.
"There is a huge amount of work to be done," she said.
"A different cultural approach is needed because each euro invested in care for the territory is a euro invested in giving our children a safer, better protected Italy". (ANSA).