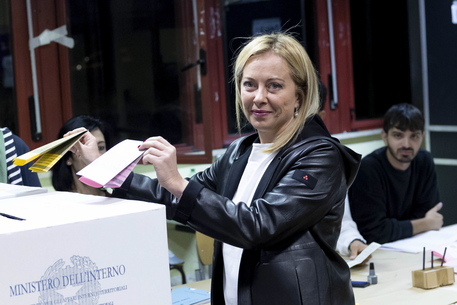 (ANSA) - ROME, SEP 26 - The centre-right coalition is set to win Sunday's general election in Italy, with Brothers of Italy (FdI) leader Giorgia Meloni looking poised to become Italy's first woman premier thanks to the strong showing of her rightwing group, according to projections.
The centre right is set to win 42-44% of the vote, with FdI getting around 25-26% (24.6% according to Opinio for Rai; 26% according to Swg for La 7).
Matteo Salvini's League, however, is projected to go under the 10% threshold with around 8.5%, about half the 17% it got in the 2018 election and not much more than the other main centre-right party, Silvio Berlusconi's Forza Italia (FI) on around 8%.
Meloni's FdI was the only major party not to back outgoing Premier Mario Draghi's government of national unity.
The centre-left is projected to get 25-26%, with the Democratic Party dropping below the 20% mark at a 18.1-19.4%.
Political pundits said PD leader Enrico Letta was one of the big losers of the night, along with Salvini, as his stance of refusing to make a deal with the 5-Star Movement (M5S) after it triggered the collapse of Draghi's coalition now looking a mistake.
Ex-premier and M5S leader Giuseppe Conte's decision to run alone, on the other hand, seems to have paid off, with the M5S projected to get 16-17% of the vote.
The centrist 'Third Pole' of former industry minister Carlo Calenda's Azione and ex-premier Matteo Renzi's Italia Viva (IV) is projected to get between 7.3% and 7.9%.
The centre right is set to control the Lower House with 233 seats, according to a Quorum/SkyTg24 project.
The centre left is set to get 90 seats, the 5-Star Movement 47 and the Third Pole of Azione-Italia Viva 19, the projection said.
The centre-right coalition is set to control the Senate with 105-125, with the centre-left getting 35-50 Senators, the M5S 21-35 and the Third Pole 9-11 seats, according to Swg for La 7.
The turnout for Italy's general election on Sunday was around 63.81% down by around nine points on the 72.9% of the 2018 election, Interior Minister Luciana Lamorgese said. (ANSA).