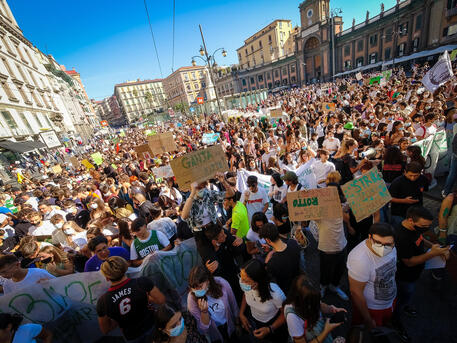 (ANSA) - ROME, SEP 20 - Fridays for Future said Tuesday that marches will take place in 70 Italian cities for the international movement's global climate strike this Friday, which is also the last day of campaigning for Sunday's general election in Italy.
Fridays For Future Italia (FFF Italia) said the climate crisis has been largely ignored during the election campaign even though, with extreme weather events such as last week's deadly storms in Marche following months of drought that wreaked havoc on the country's agriculture, the effects of the emergency are being felt here in a big way.
"The aim of the protest is to put the climate crisis and the solutions needed to address it, the great absentee of the election campaign, back at the centre of the public's attention," said FFF Italia spokeswoman Agnese Casadei.
"The disaster that occurred a few days ago in Marche reminds us of the consequences of ignoring the climate crisis.
"Our chances of averting a catastrophic rise in temperatures depend on the next five years and we risk wasting them with a parliament that does not see the climate question as a priority.
"We cannot allow this to happen. Politicians must realize that ignoring this problem is not an option if they want to obtain citizens' support.
"They must realize that not taking action today is equal to being the criminal accomplices of the biggest crisis in human history". (ANSA).