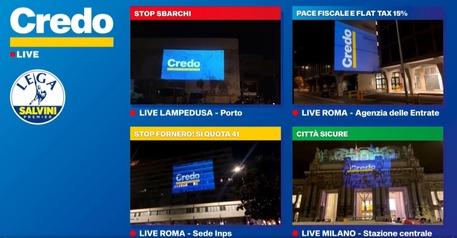 (ANSA) - ROME, AUG 16 - Italian bishops on Tuesday chided nationalist League party leader Matteo Salvini for using the slogan Credo (I Believe) on his posters for the September 25 general election.
Salvini, a divorced practising Catholic who has brandished the rosary on campaigns before, stressed that this was the expression of a "secular faith".
But bishops daily Avvenire ran a comment from Pontifical Lateran University theologian Don Giuseppe Lorizio saying "it's easy to say 'credo', but not without consequences.
"It's not hard to think that there is a thorough survey of the feelings of the people behind the choice of a political leader who is careful about the feelings of the man," said the theologian.
"In order to avert all populist drifts, it will be a good thing to try to distinguish the various meanings of the word 'credo' when we we read the word on the facades of our cities".
Father Antonio Spadaro, director of Jesuit daily La Civiltà Cattolica, cited a political work by George Bernard Shaw, the atheist writer and philosopher, voicing skepticism about the uses of belief.
Credo is the start of the original Latin version of the Catholic Church's Nissene Creed, stating belief in God.
As well as clasping rosaries, Salvini has regularly featured Catholic devotional symbols in the backgrounds of his videos and he wears the Franciscan 'tau' symbol around his neck. (ANSA).