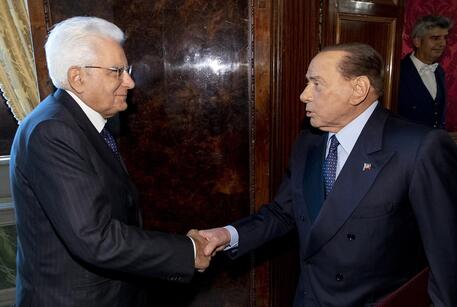 President Sergio Mattarella will have to quit if one of the centre right's flagship policy pledges, direct election of the head of state by the Italian people or 'presidentialism', is implemented following the bloc's likely general election victory on September 25, centre right leader Silvio Berlusconi said Friday.
The three-time former premier and media mogul said that Mattarella's resignation "would be necessary" in the event of the policy passing.
The billionaire, who will be 86 four days after the election, said that he himself was one of the prime candidates for an eventual election by the Italian people of their new head of State.
Berlusconi's statement was seen as an attack on 81-year-old Mattarella by the centre right bloc's opponents on the centre left.
"The fact that the centre right is starting its (election) campaign with an attack on Mattarella and a request for his resignation shows that the right is dangerous for the country," said centre-left Democratic Party leader and head of the centre-left bloc, former premier Enrico Letta.
Hard-right Brothers of Italy (FdI) leader Giorgia Meloni, who leads the centre-right coalition and is set to become Italy's first post-fascist and first woman premier, said "presidentialism is a serious and economic reform, and thanks to stability you give confidence to investors".
5-Star Movement leader and ex-premier Giuseppe Conte, whose party split with the PD after helping bring down outgoing premier Mario Draghi, said " we say No to the divvy-up logic of the centre right".
Conte said the centre right had "thrown off its mask".
Berlusconi, who failed in a bid to succeed Mattarella in January this year, when the president reluctantly agreed to serve a second term, tried to row back his remarks saying he had not attacked Mattarella.
"I never attacked President Mattarella, and nor did I ask for his resignation," he said.
"I only said something obvious and self-evident and that is, once the Constiutional reform on presidentialism is approved, before proceeding to the direct election of the new head of State, Mattarella's resignation would be necessary".
He said that Mattarella could "even be elected again".
He went on: "that's all it is: a simple explanation of how the presidentialism reform proposed by the centre-right manifesto could work.
"How you can take all this as an 'attack on Mattarella' remains a mystery.
"Or perhaps it can be explained by the bad faith of those who attribute to me an intention that was never mine".
Foreign Minister Luigi Di Maio, who leads an M5S splinter party called Civic Commitment (IC), said "Berlusconi's presidentialism is aimed at ditching Mattarella".
Letta added that the episode showed that "in order to beat the right the only alternative is to vote for the coalition born around the PD. (Berlusconi) says that if he wins he wants to change the Cionstitution for the worse".
The PD has formed an electoral alliance with Italian Left (SI) and Green Europe (EV) but has lost the support of the centrist Azione party which has formed a 'third pole' with former PD leader and ex-premier Matteo Renzi's centrist Italia Viva (IV) party.
The Cattaneo Institute said Wednesday that the centre-right bloc, which also features former anti-migrant interior minister Matteo Salvini's League party, is projected to easily win a majority in both houses of parliament on September 25.
Meloni sent a video in English French and Spanish to the foreign press this week condemning Fascism and saying her party shared values with Britain's Tories, the US Republicans and Likud in Israel. (ANSA).