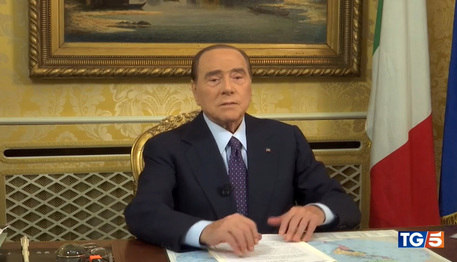 (see related) (ANSA) - ROME, JUL 22 - Ex-premier and Forza Italia (FI) leader Silvio Berlusconi said Friday that the centre right was not to blame for the demise of Premier Mario Draghi's government.
"The centre right was not involved (in causing the crisis of government)," Berlusconi said.
"We were always loyal supporters of the Draghi government".
The media billionaire accused the 5-Star Movement of bringing down the Draghi government, by triggering the crisis by snubbing a confidence vote on a decree last week.
Draghi's bid to patch up the coalition of his national unity government failed on Wednesday after FI and the right-wing League refused to back an executive that also featured the M5S.
Berlusconi said FI's election manifesto would include a pledge to make sure all State pensions are worth at least 1,000 euros a month.
He said the manifesto would be based on eight points, including "fewer taxes, less bureaucracy, fewer trials, more security for young people, for the elderly and for the environment". (ANSA).