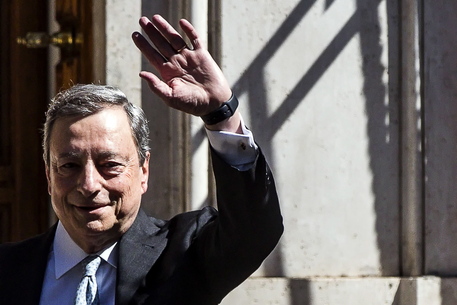 (ANSA) - ROME, JUN 30 - Premier Mario Draghi met President Sergio Mattarella on Thursday to report to the head of state on the situation regarding Italy's international commitments, sources said.
This week Draghi took part in G7 and NATO summits.
The meeting takes place at a delicate time for Draghi's executive.
Draghi returned to Rome from the NATO summit in Madrid early on Wednesday amid soaring tension with his predecessor Giuseppe Conte, the leader of the 5-Star Movement (M5S), a key part of the ruling coalition.
Conte reacted with fury at reports that Draghi had contacted M5S founder Beppe Grillo to have him removed from the helm of the movement.
Conte had talks on Wednesday with Mattarella about the issue.
Friction with the ruling coalition was already high after Foreign Minister Luigi Di Maio recently quit the M5S to form his own group after a big row with Conte over military aid for Ukraine following the Russian invasion.
Di Maio said Conte's calls for the government to stop sending weapons to Kyiv risking putting Italy out of synch with respect to its EU and NATO allies. The premier's office denied that Draghi had sought to have Conte ousted and said the reason for his early return from Madrid was in order to prepare for a cabinet meeting on Thursday with measures to curtail sharp rises in energy bills. (ANSA).