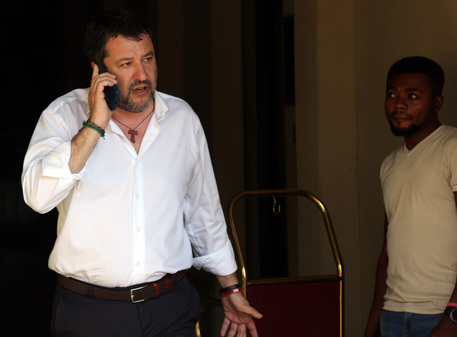 (ANSA) - ROME, JUN 1 - League leader Matteo Salvini said Wednesday that he was working "out in the open" to bring about peace in Ukraine amid controversy over reports of him meeting the Russian Ambassador to Italy Sergey Razov after Moscow invaded its neighbour.
"You have to work with the ambassadors and governments of many countries, out in the open, communicating with newspapers and TV channels, with the only goal being achieving the end of the war," Salvini said.
"I have been doing this and I'll continue to do so.
"I hope I will be in the company of the many colleagues who over the last few days have criticised me and chattered, but who don't move a finger to achieve peace, preferring to talk about weapons and war".
According to the report in daily newspaper Domani, Salvini had dinner with Razov at the Russian embassy in Rome on March 1, just days after Moscow's February 24 invasion of Ukraine, and the office of Premier Mario Draghi knew nothing about the meeting.
Salvini was reportedly accompanied by Antonio Capuano, a foreign-policy advisor to the League leader who is also a lawyer and a former MP for the centre-right Forza Italia party of three-time ex-premier and media mogul Silvio Berlusconi.
Capuano is said to have been working on a mooted trip to Moscow by Salvini to seek to broker a peace agreement with a four-point plan, an idea that has caused considerable controversy too.
The report in Domani said there were other meetings involving Salvini, Capuano and Razov in the middle of March and early April.
The centre-left Democratic Party (PD), which, like the League, is part of the coalition supporting Draghi's government, has demanded an explanation.
When asked Wednesday about an eventual peace mission by Salvini to Moscow, Franco Gabrielli, the cabinet secretary with the security portfolio and the former chief of police, said "such initiatives are not the responsibility of the heads of parties, but of the heads of government".
The League, on the other hand, said that "every initiative" seeking to achieve peace in Ukraine "should be encouraged and supported, not attacked, criticised or even investigated".
Adolfo Urso, the president of Copasir, the parliamentary body that oversees Italy's intelligence services, said Tuesday that the committee was looking into Capuano's reported relations with foreign diplomats.
Salvini had expressed admiration for Russian President Vladimir Putin on several occasions before the war in Ukraine.
The League leader has condemned Moscow's invasion of its neighbour.
He has also said he is not in favour of Italy sending any more weapons to Kyiv on top of the ones it has already supplied.
Draghi said after a European Union summit Tuesday that Salvini's actions must be "transparent" and that the government is not wavering in its pro-European, pro-G7 and pro-NATO stance.
(ANSA).